You are here: Home / Accessories / Pebble & Twine, Sittin’ in a Tree… 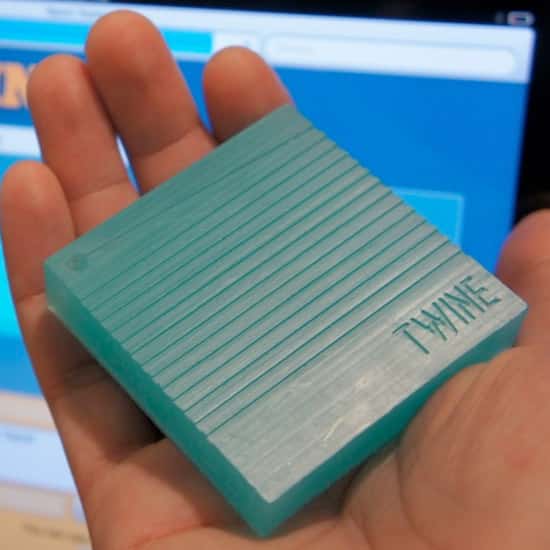 Okay, maybe we’re getting a little obsessed with Pebble. (Only because it’s the best smartwatch idea ever.) But this news is way too juicy to pass up: when it ships, Pebble will work with another Kickstarter-funded wireless device called Twine. Which opens up the possibilities for both devices in wildly creative ways.

First, a bit of explanation.

Twine is a tiny (2.5″ square) wireless device, and it may not be much to look at, but it’s got some crazy cool goodies under the hood. It’s loaded with sensors and designed to send you notifications when it detects various things happening. For example, attach a Twine box to your front door, and the on-board accelerometer will notify you when someone opens it. How you’re notified is up to you — it can be anything capable of receiving notifications, including your computer or smartphone, and using email, text, or even Twitter. Twine also comes with a clever web app, which you use to set up the notifications you want to receive via simple, point-and-click “if/then” commands (i.e., “if my front door vibrates, then send me a text message”). The device is so smart, Twine will even email you when its two AAA batteries need replacing. After a Kickstarter fan of both Twine and Pebble noted that the two devices would work beautifully together “like peanut butter and chocolate,” the two teams of developers put their heads together and made it happen. Now, Twine’s web app will include Pebble actions, so you can have your Pebble smartwatch notify you whenever Twine senses some action you’ve set it to monitor.

And that’s only the tip of the iceberg. Since both devices are open source, code-writers should find it easy to dream up new applications for how the two devices will work in tandem. The possibilities might just be endless. The initial pre-order pledges for both Pebble and Twine are now sold out, but both companies intend to offer their devices for sale to the public once those orders have been filled.

Now I’m hardly an open source enthusiast, but the irony is not lost on me that one of the most exciting Apple-friendly accessories to come along in a while completely eschews Apple’s “closed system” dogma.