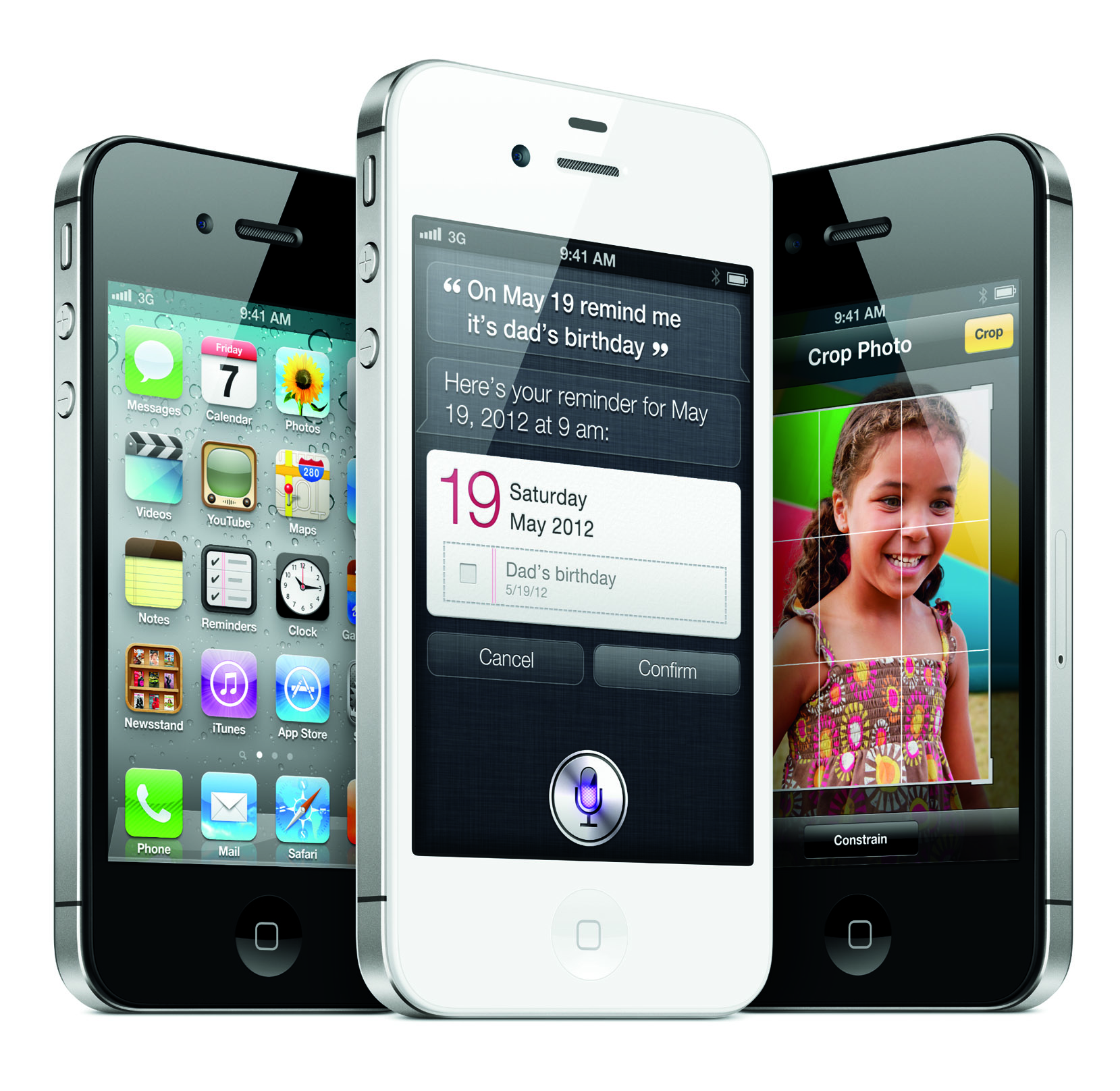 Today, Apple unveiled the hotly anticipated new generation of iPhones, but there was no number 5 anywhere to be seen. Instead, we got an upgraded, 2x faster iPhone “4S” with a powerful new camera, iOS 5 & iCloud, and a built-in personal assistant. But Apple didn’t show up without a few surprises…

The biggest difference with Tim Cook taking the helm for the first time at an Apple keynote was the most noticeable one: the blasted thing ran over an hour and a half long. Steve Jobs was a master of concise eloquence, and Apple could have used some of his brevity at this over-long event, most of which was taken up with recaps of iOS 5 and iCloud features that we already knew about. On the whole, Tim came across as more low-key than Steve, but he performed during what had to be a monumentally high-pressure moment with calm enthusiasm. The big news was the iPhone 4S, which will be available starting October 14th. On the outside, it looks identical to the iPhone 4. (To my eyes, it looked a hair thinner, but no one mentioned this, so I suppose it was just me.) But the inside of this beast is entirely new. A dual-core A5 CPU moves the device along at up to twice the speeds of the iPhone 4, and new dual-core graphics are capable of delivering visuals up to seven times faster than before. That’s quite a jump.

Yet for its leap forward in speed, the 4S maintains Apple’s high standards for battery life. The 4S offers eight hours of 3G talk time, six hours of browsing (nine on WiFi), ten hours of video, and forty hours of music. The internal engineering system has been overhauled, allowing the iPhone to now intelligently switch between the transmitting and the receiving antennas, allowing for data speeds up to twice as fast as before. Apple said that this puts their device on par with “what our competition calls 4G.”

The iPhone 4S will be available in both black and white versions, at $199 for 16GB, $299 for 32GB, and $399 for 64GB, all with a two year contract. The price of the iPhone 4 is dropping down to just $99 for 8GB, while the old 3GS workhorse is being made free with contract. Pre-orders will begin this Friday, October 7th, with product shipping one week later, on the 14th. USA, the UK, Australia, Canada, France, Germany, and Japan will have it first, followed by 22 more countries on October 28th, and 70 countries by the end of the year.

And yes, the rumors were true: Sprint will carry the iPhone 4S (in addition to AT&T and Verizon, of course).

This Camera Loves You

The iPhone 4S is getting a brand new camera, made over from the ground-up. Apple set its sights on competing with the world’s best point-and-shoot cameras, reasoning that the iPhone is already the most popular camera in use on services like Flickr. So the new camera has an 8 megapixel sensor, for up to 3264 x 2448 resolution — a 60% increase in pixels. All kinds of upgrades have been made to the cameras mechanics, including five separate elements in the lens assembly, making it incredibly state-of-the-art for such a flat device:

If the iPhone 4S were nothing but a camera, it would be revolutionary because it packs high performance value into such a small package.

On the video side, for the first time, full 1080p resolution is possible. Apple’s also added in video image stabilization, with temporal noise reduction. And like iPad 2 users, you’ll be able to use AirPlay Mirroring, so you can watch what’s on your iPhone’s screen on your TV set. AirPlay will work wired or wireless.

Skynet, You’re On in Five It’s one thing to hear all the rumors about the iPhone’s new “Assistant” feature — an “intelligent personal assistant that helps you get things done just by asking.” It’s another to see the thing in action.

Apple has opted to call the iPhone’s “most exciting new feature” Siri instead of Assistant, after the company that first created the technology (and which Apple subsequently purchased). Siri offers voice interactivity with all built-in apps on your iPhone — and it’s got super intelligent, “Star Trek computer” kind of smarts. There’s a new microphone button on your iPhone’s screen, so when you tap and hold the button, you can ask any question you want, and Siri will access the necessary resources — everything from your personal calendar and contacts list, to Wikipedia or Wolfram Alpha on the Internet — to answer you. You can even ask the same question in different ways, using natural, conversational English, and Siri will understand you.

Not only is Siri smart, but it remembers details about your life (such as who your closest friends and loved ones are), it provides smart contextual suggestions, and it’s always aware of your location. On-stage demos included Apple execs asking Siri about the weather, setting an alarm, checking the stock market, finding out the time in Paris, requesting “a great Greek restaurant in Palo Alto,” and more. All of it in everyday English, and Siri understood every bit. Factual answers were accurate every time, and calendar and contact management was handled automatically. One exec told Siri to “remind me to call my wife when I leave work,” and Siri set a geo-tagged reminder, so that he would get an alarm when he left the Apple campus, reminding him to call the person in his Address Book that Siri already knew to be his wife!

Siri will also take dictation. The microphone button has been added to the on-screen keyboard, right next to the space bar, so you can choose to talk instead of type. Siri works great “out of the box,” but gets smarter over time as it learns your voice and lifestyle patterns. Siri ships with the iPhone 4S — and will only work on the 4S (sorry, no reverse compatibility) — but will be in a beta mode to start. It’s available in English, French, and German, but more languages are forthcoming.

iOS 5 finally has a release date: October 12th for all devices. And iCloud will ship day-and-date with it. Both products are free, though iCloud will only work with iOS 5 and Lion. The much-ballyhooed iTunes Match music service launches at the end of October for $24.99 a year. Oh, and perhaps thumbing its nose momentarily at Spotify, Apple snuck in a mention that iTunes Match will stream your entire library.

A new iCloud app was announced called Find My Friends. IfÂ someone has chosen to share their location with you, their iDevice will talk to yours, and give you their location in real time. Privacy lovers, fear not: location sharing stops automatically at the end of the day, and Apple promises easy privacy controls, parental controls, and options for temporary sharing.

There was also a new iPhone app announced called Cards, which will be available with iOS 5 on October 12th. With this app, you can create and mail cards right from your iPhone or iPod Touch. Apple will then print and mail the card for you automatically — and even send you a push notification when it’s been delivered. Apple’s priced its greeting cards competitively against the likes of Hallmark, at $2.99 per card nationally, and $4.99 worldwide. Very impressive.

The Not-So-Little Music Player That Could

Lest we forget that there would be no iPhone without its little iPod brother preceding it, Apple surprised everyone by refreshing its iPod lineup. But the “iPod Family” shown did not include the iPod Classic (you know, the one with the click wheel). Has it been phased out, as predicted? Hm…

The iPod Nano saw a price drop down to $129 for 8GB and $149 for 16GB, and its user interface got a touch-up as well. Instead of four tiny icons, now you can display one big one at a time, and swipe between them. The Nano now comes with an improved experience for fitness users, which offers no more need for special sensors or bands. It’s ready to go for power walkers and runners right out of the box, no downloads required. In a nod to third-party accessories, Apple decided to go ahead and acknowledge that the Nano works great inside a watchband by adding sixteen clock faces. The new Nano (which looks identical to the old) comes in seven colors, and is available today.

Ol’ Steve was never big on gaming, but tolerated — and eventually embraced it — because of the awesome ways iOS devices could be used for gaming. And because of the insane revenues games generated in the App Store. At today’s event, games were given a special moment in the sun, as Epic Games was on hand to announce Infinity Blade 2, the sequel to their super popular RPG. Epic’s new game, according to Apple, uses “some graphics techniques that aren’t even available on home gaming consoles” like reflections and self-shadowing. The new game finds the protagonist searching for the Infinity Blade’s creator, and he can use two swords now instead of just one. Infinity Blade 2 will be available in the App Store on December 1st, and will run at its most optimized on the iPhone 4S.