You are here: Home / Mac / What Makes Apple’s SSDs So Fast? NVMe SSDs 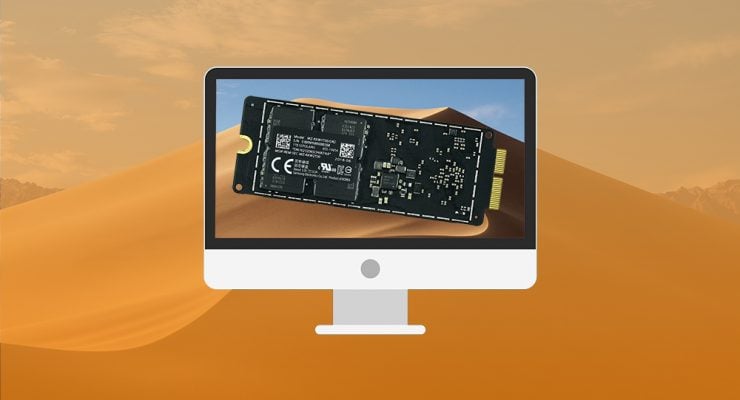 Storage technology has evolved by leaps and bounds since the dawn of the computer age. Today’s leap forward is NVMe, a storage system that promises to exponentially increase the bandwidth available to storage devices. Apple’s SSDs are well-made, no doubt, but that’s not their sole source of speed. That is granted by the impressive bandwidth of the NVMe storage standard.

For high-end consumer and enterprise storage, NVMe is the new standard. Scroll through PC listings, and you’ll see the option on higher-end laptops and PC workstations. It’s also baked in to Apple’s mobile devices, and some Android smartphone manufacturers employ NVMe storage as well.

Like SATA, NVMe is a connection standard, not a form factor. It describes the connection standard only, not the size or shape of the drive. M.2, on the other hand, is a form factor, but one so closely associated with NVMe that the two have become somewhat synonymous, despite the technical inaccuracy. When researching, be sure not to make that same mistake.

How Fast Are NVMe SSDs?

NVMe was created because newer solid state drives saturate even the bandwidth of SATA III. At a theoretical maximum of 6 Gb/s (that’s gigabits, eight times smaller than a gigabyte), the SATA III connection is swiftly saturated by a high-quality SSD under good conditions. But flash storage can reach speeds far beyond what SATA III will allow. To free the silicon from its SATA shackles, NVMe was created.

Rather than doubling SATA III’s bandwidth by using two interfaces for each drive, a cumbersome, expensive, and power-intensive idea, the industry has instead begun steering towards NVMe drives as the future of digital storage. For the fastest, most future-proof storage devices, NVMe is the pinnacle of our time.

When sending data over the PCI Express bus, NVMe can use up to four PCI Express lanes, sending data in parallel. Each PCI Express lane can handle approximately 4 GB/s or 32 Gb/s. That’s more than five times as fast as SATA III’s theoretical maximum. While no device ever reaches those speeds, the headroom available for SSDs to exploit is enormous. As a result, transfers happen as rapidly as the operating system and storage bus can handle them, exponentially increasing the speed of data transfer and increasing machine productivity.

NVMe SSDs are the fastest SSDs you can buy today. They combine the already speedy flash memory with the fastest available connection standard available on most PCs. If you care about speed, NVMe is where you’ll find it.

Most modern consumer NVMe drives are sold in the M.2 form factor. This gum-sized storage format contains sufficient space for an impressive number of NAND cells. It’s typically connected over a reserved M.2 slot on a motherboard. An M.2 card can also be mounted to a PCI Express card that accepts M.2 SSDs, which is actually how some of the commercially available NVMe SSDs in the PCI Express form factor are made. Other manufacturers solder the chip in place, but the difference in performance is only noticeable at the highest levels of utilization and reliability.

There’s no speed benefit to a PCI Express form factor for NVMe SSDs, since the electrical connection between the storage controller and CPU are the same either way. A PCI Express card might provide better cooling, depending on fan and heat sink configurations, but that’s a natural consequence of the PCI Express card’s larger size, which can fit a greater number of ancillary components on the circuit board.

Apple, of course, uses proprietary connectors, with their own electrical connector scheme and design. Today, the day of spinning drives is clearly at the end. All of the devices available from Apple use SSDs, excluding low-end configurations of the iMac. Every other device uses NVMe. The form factor varies across the devices, but the communication standard is the same. Since 2015, Apple has used NVMe drives as their SSDs in their relevant Mac devices. It’s also included on iPad Pros, and iPhone since the 6S. Basically any device you buy from Apple today with an SSD will be running NVMe storage under the hood. That’s what makes Apple’s hard drives so fast.