You are here: Home / iPhone / The Best iPhone Solar Chargers On The Market 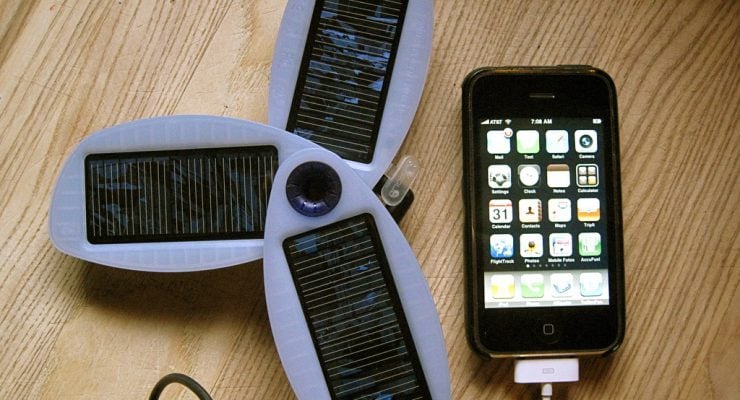 The idea of an iPhone solar charger, that is, a device that charges your iPhone via the power of the sun has been around since there have been iPhones. However, it’s a pretty unique market and not a lot of big names have gotten into it. You have to figure that most people charge their phones at night when they’re going sleeping with a simple cord and solar chargers are probably a bit expensive to manufacture. However, there are a few demographics that love solar chargers. I spent three summers as a beach lifeguard and we listened to Pandora on the stand every day. Our entire patrol, all 80 of us, never left home without a construction-style portable radio, aux cord and a solar iPhone charger. Mine was corny, purchased at Target and shaped like a flower, but it kept my phone alive in a jam and that was good enough. Here are a few of the best ones out there right now. I had a fellow lifeguard that had a Nekteck and he loved it. It was big enough to suck up a lot of sunlight and was fast and durable. The only downside to the piece was that it didn’t store much power so you had to have your phone plugged in the whole time it was in the sun. The X-Dragon is one of the better pieces on the market, probably because it can stand up to a little bit of a beating. And if you’re going to be outside, chances are you’re doing something where your phone might get wet and the charger can’t break at the first sight of rain. Another big bonus is that it can charge two devices at once.

The Aedon is perfect for anybody that’s looking for something small that they can slip into their pocket but that gets the job done. It doesn’t store much battery so if you’re going to charge your phone then I’d suggest having it plugged into this thing while it’s in the sun. This is the perfect piece for you if you’re just looking for something quick and small that you won’t have to spend a ton of money on. The Sunfermo packs a punch. If you need something to take with you skiing or rock climbing then I’d have to suggest this piece. The company claims that their piece is “weatherproof” and I don’t know what that means but I have a buddy who’s had one of these for a few years and he has no complaints. He’s dropped it, lost it in the sand and left it in the rain twice and it still works. The iBeek is a nifty little piece that’s built for the outdoorsman (or woman) in you. It’s got a compass and a flashlight and it can take a beating. The only downside to this one is that the conversion rate is rather low so you have to use it for a while. The Trekbest is a sweet little piece that is cheap enough that you don’t have to worry too much about it. That being said, it’s pretty durable. It also has a flashlight built in, so they must be marketing it to the outdoor crowd. I’d definitely drop a few bucks on this one.

While some of these pieces are actually really good, you should never rely on them as your primary outlet source. Unfortunately, the technology for solar charging is still growing and it hasn’t really fully transitioned into the iPhone market yet. The big change that needs to happen is for a big name company like Lifeproof to jump on board this train and come out with a solar charger. Then we’ll see leaps driven by competition. However, if you’re looking for something in an emergency, all of these pieces will be perfect for you.

Best Addicting Games For This Summer

The Waterproof Cases You Need This Summer