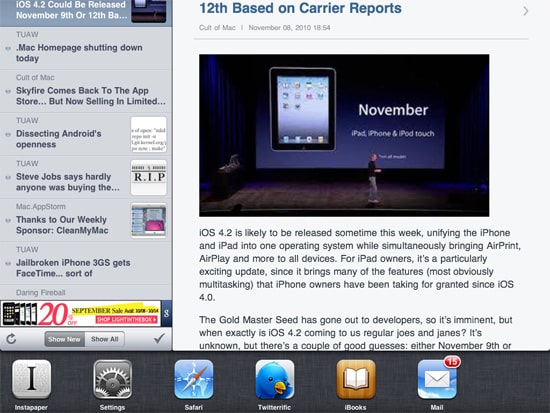 According to German reports sourced by Cult of Mac, iOS 4.2, might hit your iTunes account this week, together with iTunes 10.1 which will be needed to install the new iOS release.
Two dates are rumoured: November 9th (tomorrow, a Tuesday and regular update day) or November 12th. iOS 4.2 GM (Gold Master) was seeded to developers last week, so while only one week might seem a short period, both dates could bring the new iOS.

iOS 4.2 is the update many iPad owners are waiting for because it finally brings multi-tasking to the iPad, just as well as folders, AirPrint and AirPlay. And removes the hardware screenlock feature, now leaving you with two ‘mute buttons’. The multi-tasking functionality is very spiffy and apps reopen very quickly, within less than a second usually.
For those of you who don’t have an iPhone or iPod Touch with iOS 4, here’s how to find the multi-tasking feature: hit the home button twice. A nice and fast animation will push up your actual screen and open the bar with active applications (except for the application you have open).

One IMHO silly decision coming with iOS 4.2 is the deactivation of the hardware screenlock, turning this button into a [volume] mute button. This now leaves me with 2 hardware mute options with the volume control being easy to change 100% up or down already. Luckily the screenlock option is still available but this time as a software feature.

To get to your new screenlock button, bring up the multitasking bar (hit the Home button twice) and swipe to the left. You now have the iTunes button, volume controls controls, iTunes controls, a brightness slider and then the screenlock button available (from right to left).

While it still is simple to access the screenlock, personally I do miss the hardware functionality and could very well have continued using the volume controls to mute.