You are here: Home / Apps / Chrome Comes to iOS: A Quick Primer 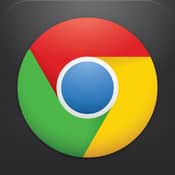 Looking for an alternative to Safari for iPhone or iPad? (Aren’t we all?) Google may have answered your prayers, because they’ve just brought Chrome to iOS.

The iPhone and iPad versions of Chrome are identical in their feature sets, but the design of each is optimized for those respective devices. For the purposes of this article, I’m using iPad screenshots, because they provide better visuals of the app’s features.

I’m not sure how Google did it, since developers have to use Safari’s guts to power any iOS browser. But in my thoroughly unscientific testing, darn if Chrome doesn’t feel faster than Safari. Maybe it’s just me, and it’s probably impossible anyway, but Chrome seems to bring up websites crazy fast. It looks and feels and seems to function nearly identically to Chrome for Mac — with familiar features included, like Incognito tabs, a unified search/URL bar, saved passwords, search within a page, search results that appear below the search bar as you type, one-touch bookmarking, and more. But it does have some nifty features that are built with touchscreen devices in mind. The first one I noticed is a cool swipe-to-switch-tabs thing, where if you swipe from the edge of one side of the screen or the other, it switches your open tab to the one to the immediate left or right. A necessary function? Not especially, since Chrome for iOS has the same visual tabs at the top that its desktop sibling has, and you can tap them to switch tabs. But it’s cool, and it feels very natural. iPhone users can flip through tabs as if they’re fanning out a deck of cards. Again, not necessary, but very, very cool. Chrome also offers unlimited tabs, so if you’re tired of Safari’s limit of nine open tabs at one time (a limit that iOS 6 will correct this Fall), Chrome may be for you. If you’ve ever tried the Google search app, you may already be familiar with its built-in voice search. Chrome inherited this function as well, and it can be accessed instantly via an icon in the browser’s top bar. Other features and settings can be accessed from a menu button on the top bar. One of the nicest features steals iOS 6’s thunder in a big way: synced browsing between your iDevices and your computer. Not only can you sync bookmarks and passwords between devices, you can sync your open tabs as well. As Apple pointed out at WWDC, this lets you pause working on your computer but continue on your iPhone or iPad if you’re on the go.

Chrome is available for free download from the iTunes App Store right now.

Chrome for iOS was announced alongside Google Drive for iOS, which gives you quick access to anything you have stored in Google’s cloud, such as photos, videos, and document files. Drive offers some equally cool features, such as offline access to your files, and simplified, one-touch sharing.