You are here: Home / iPad / Amazon vs. Apple: The Tablet War 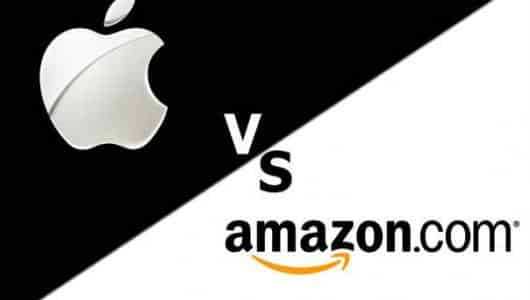 When Steve Jobs first introduced the Apple iPad, it was launched with such fanfare that the technopress were referring to it as the “Jesus Tablet”. Well, Apple could only remain in the clouds for just so long, and now, at about the same time as the introduction of the third generation of iPad, that other celestial body, Amazon is floating in.

What’s Amazon Got That Others Don’t?

Other competitors have tried to compete with the now ubiquitous iPad, but none with the clout of an Amazon. The Amazon applet is going to have a 9-inch screen and a built-in Kindle e-reader, but will be able to deliver just about any kind of digital media, not just books and music.

Just when everyone thought that the Apple iPad would put Kindle out of business, Amazon announced that they will introduce their own version of a tablet in October. War has truly been declared.

To date, Apple estimates it has sold 25 million iPads, , but if its second quarter sales of 8 million hold, that will mean 32 million in 2011. Can Amazon compete? Amazon is using Google’s Android operating system and opening their own Android app store to keep the peripheral sales in house, but to compete with Apple, Amazon will have to wow customers with brave new features.

But Can They Beat Apple?

So far, it looks like they will not. The screen is smaller than the iPad’s 9.7 inches and it doesn’t have a camera. The manufacturing is going to be outsourced, probably to keep the price down, but will that also keep the quality down?Â  If Amazon is going to win this battle (and this has to be just the first of many battles, because it is surely going to be an ongoing war), the big attraction they will have to offer to customers will be price. Â Can they compete with Apple’s $499 price tag and still offer a quality product? Will they cut the price just to get into the market, and take a loss? Or will they merely sell a $179 kindle with a few new bells and whistles and get a few more dollars for it?

Or Is It a Different Game for Them?

The other speculation is that perhaps Amazon is willing to take a loss because they are looking at a completely different business model than Apple’s. Â Apple promotes its digital content to sell more devices. Perhaps Amazon has decided to push devices in order to sell digital content. After all, they are the world’s largest bookstore.

In addition, Amazon will probably sell the tablet with the Android Appstore already installed, making it simpler and easier for users to buy anything Amazon. For that kind of seller power, they may just be willing to lose on the device itself.

Any way you look at it, it is going to be an interesting fight.Â  Be sure to have ring side seats this coming October.