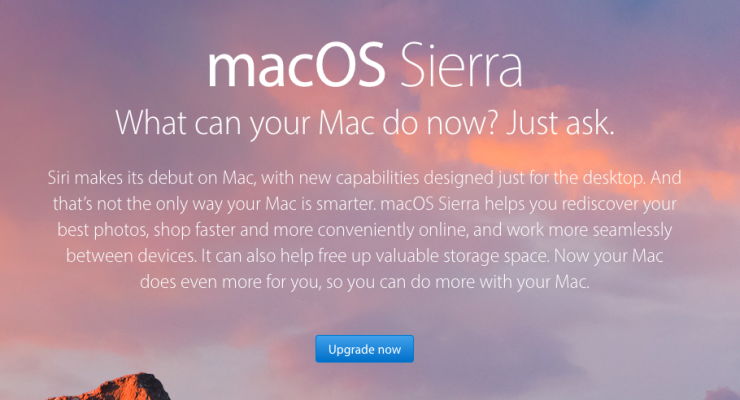 MacOS Sierra was recently released and I’m finally excited about a system update. Sierra is another step in Apple’s plan to dominate everything, with the HomeKit app and Apple Pay, I feel even more helpless without my phone or laptop on me. Add to that the fact that I’m about to order the new watch and I guess it’s safe to say that I’ve drunk the Kool-Aid. MacOS Sierra is great, and the new features help bridge the gap even more between all your Apple products. Here are a few of my favorites.

Apple has done a lot of work with everybody favorite personal assistant lately MacOS Sierra now has Siri on it, just like you have her on your phone. While it seems pointless having her to simply ask for directions, Siri will be able to find files on your Mac, which is what I’m really excited about since I seem to have dozens of titles with the same name. Since this is the first appearance of Siri on a computer, we aren’t really sure how fool-proof she will be, but I’m hoping for the best.

One of my favorite MacOS Sierra features is the appearance of Apple pay on the computer. As somebody who constantly loses any credit card, I’ve come to love Apple Pay. Now with the computer compatibility, it’s even better than before. You still need your phone, since it runs your fingerprint via the home button, but I used it yesterday and it’s pretty much seamless.

If you own an Apple Watch, you can now log into your computer without typing in your password. The new OS makes it so that your computer senses the watch and automatically unlocks. It might not be a complete game-changer but it’ll save a few minutes and make you feel just a little more like James Bond.

One of my favorite MacOS Sierra features is the messages update. Before, I’d always felt that Messages was kind of flimsy. It was convenient but it didn’t feel as personal as when I’m texting on my phone. With the update they’ve changed that. Your able to preview videos in your messages app and send off emojis. It’s got to be one of the strongest updates.

iTunes got a new look. Since Apple has been fighting to keep up with Spotify, they’ve been pulling out all their tricks (or at least copying Spotify’s). The new “For You” tab curates new music for you so you don’t have to go looking for it. I haven’t used it at all but the Reddit boards are lighting up about it. I probably won’t bring myself to use iTunes since I don’t want to waste all that space on my computer downloading songs when I can just stream them.

Your Old Mac Is Useless (not really a feature)

I knew the day was going to come when my original Macbook would belong in a museum rather than on my desk. And it’s been slowly getting more outdated. The last few system updates have been able to run on older generations of computers, but Sierra finally isolated your old hardware. Pretty much anything made before 2010 won’t be compatible with new OS.

What We Didn’t See

Why, why, why hasn’t there been an update in the Mail app? I’m on my email all day long but I still don’t like the mail app and an update was noticeably absent from Sierra. I hate the Mail feature, it feels so static and is about as user-friendly as a Norad computer (a bit of an overstatement). Hopefully with the next update they get their stuff together.

5 Things We Learned From The Tim Cook Washington Post Interview