You are here: Home / Apps / U.S. Election Apps to Keep You Informed 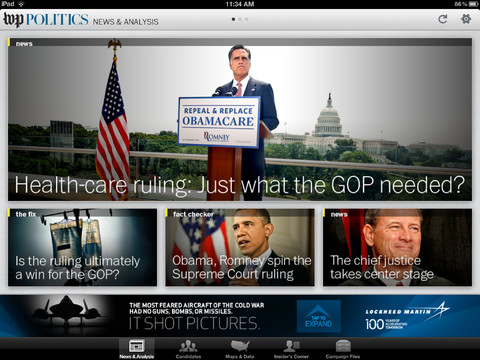 The U.S. elections is keeping people busy, with pundits proselytizing all over the place and critics bashing left and right. The chances are that you’re being kept on your toes trying to catch as much information as you can about the elections. There is nothing wrong with that; in fact, I’d say responsible voters ought to be as updated as possible.

So, if you can’t get enough of the election coverage, here are some election apps that will give you what you need whenever, wherever. “News, opinion, polls and live election night results.” That’s what you get from this app, and the NYT claims that it’s the best campaign coverage you can get. Additionally, you also get served news items from other sources online (apart from the NYT). It’s available both for iOS and Android. The second in our list of election apps focuses on the battle between Obama and Romney. Free via the App Store, Campaign 2012 delivers news, opinions, and analysis from various sources online. You even get access to the candidates’ Twitter feed within the app. Not all election apps are for the iPhone. If you prefer reading on your iPad, this app from the Washington Post will more than satisfy you. Called WP Politics, the app aims to “keeps users informed about the political news that matters, but also helps separate truth from spin and reality from rhetoric through interactive tools, maps and features.”

I particularly like that last bit about separating truth from spin and reality from rhetoric. We all know how messy and confusing campaigns and elections can be, but this app just might help you sift through the information more efficiently. If you are already a staunch follower of NBC, then their iPhone and iPad app is your intuitive choice. NBC Politics features video, features about the candidates, and updated news items. It also highlights a “tip sheet”, which is basically a roundup of the day’s election-related news. This is rather handy for those who do not have much time.

Additionally, if you use the iPad, you can check out the “battleground map”, which is an interactive map that allows users to test potential electoral votes outcomes. It’s like predicting which way the tide will turn!

PollTracker
If you’re a poll junkie, PollTracker is the perfect app for you. Published by TPM Media, this app covers congressional elections as well as the presidential race. From information swing states to key voter group data to details on each candidate – you can find all these at a glance. With this election app, you can probably run your own show and give your commentaries on the election!

No matter where your political inclinations lean toward, these election apps will certainly give you more than your daily dose of information.