You are here: Home / Apps / Is MS Office Coming to iPad or Not? 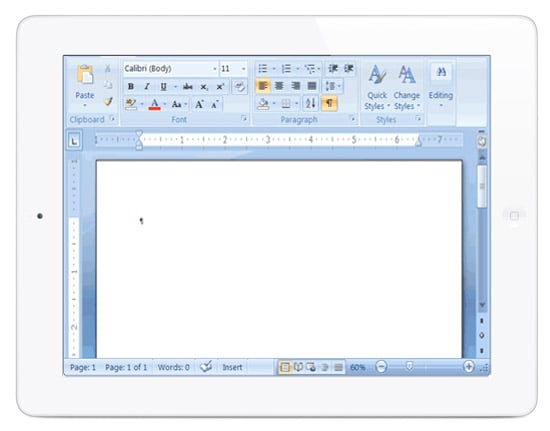 One minute it’s officially confirmed, the next it’s formally denied. This is exactly why I hate rumors: no matter what the truth is, somebody’s lying.

So here’s what happened today. A Czech news agency reported on a Microsoft event where it was announced that Redmond is planning to release versions of Office 2013 for both iOS and Android next year. The story was picked up by TheVerge and every other tech blog in the world. (Here’s a Google-translated version of their report.) The report quotes a Microsoft product manager named Petr Bobek (who Steve Ballmer has no doubt personally whipped with a cat o’ nine tails by now), who said that both tablet platforms will get Office 2013 sometime very soon after the Windows version arrives this coming February. And of course, after Microsoft’s own Surface tablet gets its version of Office 2013, too.

Sounds great, right? Not so fast.

This afternoon, Microsoft’s head of corporate communications, Frank Shaw Tweeted a short statement saying only, “The information shared by our Czech Republic subsidiary is not accurate.” And in case you were hoping for more details, he added, “We have nothing further to share.” Leaving all those tech blogs and news agencies to hastily change the word “Report” in their headlines to “Rumor.”

So… Is it happening or isn’t it?

The idea of Word and Excel and PowerPoint on a tablet is too much of a no-brainer to never happen. The Daily thought it was going to happen almost a year ago. Here’s what I think is going on.

Office for iPad and Android is happening. Count on it. The Daily was absolutely certain about their information, and most reputable news agencies don’t report with such convictions unless they have the evidence to back it up. (The Daily‘s original report included a convincing photo of a tablet-friendly version of Office running on an iPad 2.) I think The Daily‘s report was accurate, and note that Mr. Shaw’s Tweet today was super vague, saying only that the Czech media’s report wasn’t accurate; he was careful to never deny that Office for iOS is coming. I believe that sometime after The Daily‘s story, Microsoft — late to the party, as usual — changed its entire business plan to revolve around Windows 8’s touchscreen-friendly interface (with an emphasis on Surface and Windows Phone). This was a radical shift in the company’s plans, and it restructured everything they had on the docket, including those for Office for iOS. It wouldn’t do for Office to come to the iPad before it comes to Surface, after all.

So I think we have Surface and Windows 8 to thank for a one-year delay of Office for iOS.

But I still wish there was a way to stop rumors from taking over the news.