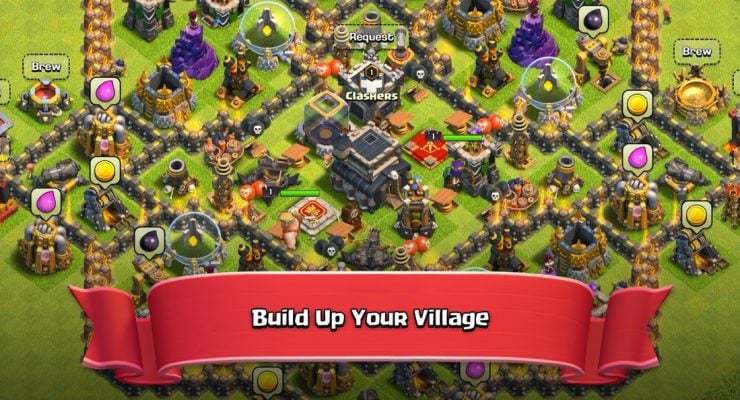 While a lot of people today are leaning towards action and adventure games because of the thrill that they bring, much can be said about how engaging strategy games are. Having to work your mind and think about how to grow, build, and guard your properties against enemies can really exercise your brain. This type of game is generally known as tower defense games, where you basically guard your tower against invaders.

What makes this type of game so engaging is that you get to explore different kinds of worlds and practice your imagination. Despite it being a strategy game, it doesn’t scrimp on the action department. There’s still some action and adventure involved while exercising your analytical skills at the same time. So, it shouldn’t come as no surprise that we are always on the lookout for the great tower defense games. If you’re searching for the best tower defense games to play on your iPhone, here are some great options.

Probably the best tower defense game that you can download on your iPhone today is Kingdom Rush. Published by Armor Games, Kingdom Rush was developed by Ironhide Game Studio. It’s actually a series of games but this is the original one. Kingdom Rush currently sits on the throne when it comes to tower defense games, as it features great strategic gameplay and inventive levels. The comic book graphics are fantastic, too.

A long-time player in the tower defense game is Plants vs. Zombies. Some might say that it’s more of a lane defense game but the concept is quite the same. It’s developed and published by PopCap Games, which is a pro in this industry. Hence, you can say that this game is guaranteed to be fun and engaging. You get to build your own defense to guard your base against zombies. In case you find your defense lacking, you can also upgrade it during the defense.

Once you’ve completed all the levels in Plants vs. Zombies, what’s next? Download Plants vs. Zombies 2, of course! This new version has 50 levels to surpass and also features a survival mode so you’ll certainly be engaged for hours on end. Don’t worry that it might be too complicated, as the gameplay is still easy to understand. It has over 45 types of plants to defend against more than 25 types of adamant zombies, which aren’t the regular kind either. This tower defense game is not something to miss!

Bad North is a great tower defense game to try out if you like coming up with tactics and strategies. In this game, you have to protect your idyllic, beautiful island against the Vikings. These invaders will do anything and everything they can in order to take over your island so your tactics must be effective enough to destroy them before they succeed.

Published by Supercell, Clash Royale is the perfect tower defense game for someone who wants different elements incorporated in the game. It’s a hybrid game that combines the usual tower defense concept and card battling scenarios. Plus, it also features multiplayer online battle arenas or “MOBA” so you can play with other gamers, too.

Do you want something that looks and plays a little more like RTS classics? If so, why not check out 2112TD? This game pays tribute to games like C&C and Starcraft. Hence, if you’re a fan of these games, you’ll certainly appreciate the look and gameplay of 2112TD. It features an isometric perspective that you might enjoy while playing the game.

Developed and published by 11 Bit Studios, Anomaly 2 is the sequel of the original and successful game Anomaly. It’s a game where you play as the attacking swarm instead of defending your base. Your goal is to infiltrate your enemy’s static defenses. It’s still a tower defense game, but you get to play the opposite side. This version offers better, more engaging visual effects.

Coming from a series, Sentinel 4: Dark Star follows the footsteps of Sentinel 3. It took quite some time before Sentinel 4 was launched but it was definitely worth the wait. This version requires hardcore tower defense strategies so if you’re a long-time tower defense game lover, this game is definitely worth checking out. It features systems that a lot of players would find refreshing and challenging at the same time.

Most tower defense games are quite solitary but if you’re looking for something more, try considering Random Dice. This game gives a curious PvP angle that you might appreciate. Its abstract dice aesthetic may also look appealing depending on your taste. This game has a clean and concise look while still engaging players.

Kingdom Rush has a lot of versions in the series and one of the most recommended ones is the Vengeance version. This also happens to be the latest version of the series. Unlike other tower defense games, you get to control the baddies this time. It’s definitely not the typical tower defense game that you’re used to, and that’s a good thing. You get to put a wicked spin on things and the core gameplay is still excellent as expected from this franchise.

Developed by TreeFortress, Bardbarian incorporates the structure of lane defense for its gameplay. However, the game also consists of RPG elements that make it engaging for players. In addition, there’s also arcade shooting involved. While it sounds unusual for a tower defense game, it actually works great and keeps players hooked for hours.

If you want to play as the main protector of the game, Eri’s Forest TD is a good match for you. It’s an organic tower defense game, and we mean it quite literally. The main character plays the forest guardian tasked to protect the forest. This means that you have to protect the giant trees living in the forest again invading insects that wish to destroy them.

If Kingdom Rush is currently considered the king in the tower defense game category, the next contender would definitely be Fieldrunners 2. It’s a game developed and published by Subatomic Studios. Similar to the original version, Fieldrunners 2 also features the classic tower defense template. However, this version showcases excellent open and funneled levels and an excellent array of enemy types. The slick, beautiful graphics don’t hurt either.

Another version from the Kingdom Rush series worth checking out is the Frontiers version. This is the second version of the series. While its features are quite far from the latest version, this version can still hold its own. The core gameplay is completely the same as with the original, but the setting is new and different, so it’s quite refreshing to players who just finished the original version.

If you’re just finished the second installment of the Kingdom Rush series, don’t go straight to the latest version just yet. Instead, check out the third version first: Kingdom Rush Origins. While it’s not refreshing as the latest version, it still features new towers and an array of heroes you haven’t seen before. Its new lineup of heroes is also worth checking out.

Want something a little more modern and probably something more applicable to today’s times? Arknights is a game where you fight against a deadly infection. As a representative of a pharmaceutical company, you must find a way to put a stop to the spread of this infection. Plus, you’re also tasked to deal with the unrest that the infection has caused in society. The scenes are also designed anime-style so you’ll definitely enjoy the graphics of this one.

Despite its name, Tiny Defense 2 leaves a huge impression on those who have already played this game. Published by Picsoft Studios, this game is similar to its original version wherein the tower defense template is flipped around to a side-on perspective. This version would be better appreciated by people looking for a modern look and feel in their tower defense games.

Developed by Foursaken Media, Block Fortress looks uncannily like Minecraft. However, the former’s 3D effects make it stand out more. It’s not the same as the typical building blocks that you usually see in most tower defense games. In this game, you get to choose a place as your base and build a fortress there. There will be enemy waves where they try to seize your land and you must find a way to defend your base effectively and successfully.

OTTTD: Over The Top Tower Defense Over the Top Tower Defense, or OTTTD for short, is another tower defense game worth checking out if you want to have a little more fun than usual. Aside from the usual strategies and tactics, this game also utilizes silly humor to keep players engaged for hours. There’s also cartoony gore in the game so there’s fun involved. In addition, OTTTD also features real-time strategy elements to add some more excitement to the game.

Of course, you shouldn’t forget about Clash of Clans. It’s been one of the most popular tower defense games of all time. You get to build your own village and grow your clan, plus you get to engage in clan wars. Through these battles, you get to show the might of your clan and build more from the spoils of war. It’s definitely a tower defense game that’s a must on your list!