You are here: Home / Rumors / Why Apple Probably Isn’t Making a Camera to Compete with GoPro 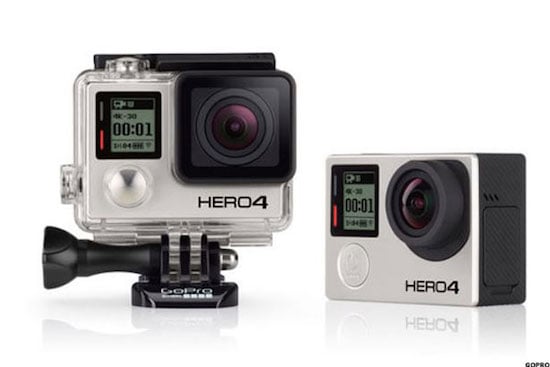 Earlier this week it was revealed that Apple had been granted a patent for a wearable camera similar to those made by GoPro – the company that has the dominated the POV action-cam market for years. The news was startling enough to investors that it caused GoPro stock to plummet more than 12%, triggering a NASDAQ alert that temporarily halted trading in the process. The mere hint of the possibility of Apple entering yet another consumer electronics market was enough to get analysts excited, and cause a potential competitor to lose significant value. But as intriguing as it would be to have Apple go head-to-head with GoPro, it isn’t likely to happen. Here are some reasons why the Cupertino-based company probably isn’t making an action cam.

In the patent filing, Apple outlined a camera system that very much resembles the models offered by GoPro. The new device would have the ability to attach to a bike helmet, motorcycle handlebars, a surfboard, or just about any other surface to capture photographs and video from unique vantage points. But the patent also describes several ways that the camera could potentially improve on the GoPro formula as well. For instance, Apple’s camera would have the ability to attach to a scuba mask and record both video and sound while underwater, something that the GoPro models can’t currently do. The patent also outlines methods for remotely controlling the digital camera using a device that looks suspiciously like an Apple Watch as well.

While the idea of Apple releasing such a product sounds intriguing, it is important to keep some things in perspective. First, Apple applies for – and is granted – hundreds of patents each year. In 2014 alone it received just over 2000 total patents, averaging more than five per day. Most of those patents are for ideas that never see the light of day, or end up being incorporated into other products such as the iPhone, iPad, or iOS. There is the possibility that Apple’s latest patent is merely a hint of things to come for the cameras contained inside their ubiquitous smartphones, and not for a stand-alone device at all. It should also be noted that at least some elements of the patent were acquired when Apple purchased intellectual property that once belonged to Kodak. That acquisition was made back in November of 2013, and this patent could simply be a result of the tech giant protecting assets that it now owns. We know that Apple is fiercely protective of its own intellectual property, and isn’t afraid to lawyer up when necessary, so this patent filing may just be a way for them to prevent their ideas from being used by someone else.

One of the biggest reasons Apple probably isn’t making a camera to compete with GoPro is that the action camera market is simply too small to draw its attention. In 2013, GoPro reported revenues of about $1 billion, which was enough to make it far and away the most dominant player in the action cam space. During that same year, Apple raked in almost $175 billion. That means that if the company were to match GoPro in revenues, it would make up less than 1% of its total bottom line. That hardly seems like something worth putting a lot of effort into when there are far bigger fish to fry. To put this further into perspective, the App Store alone generated $500 million in sales during the first week of 2015. In other words, GoPro’s market share is fairly small potatoes in financial terms. Make no mistake, GoPro has been a Wall Street Darling since its IPO last June. In fact, even after the revelation of Apple’s new patent, the stock is worth double its initial asking price. The company’s camera are a staple amongst outdoor and adventure filmmakers, with rivals like Sony and Garmin constantly trying to play catch-up with cameras of their own. But while GoPro is a big fish in a small pond, Apple is the biggest fish in the ocean. Its market cap makes it the most valuable company in the world, and for them, releasing a GoPro-like camera would be tantamount to another “hobby” not unlike the AppleTV. Incidentally, that hobby also managed to garner $1 billion in revenue in 2013.

So while it doesn’t seem impossible that Apple might be pursuing the action cam market, it does seem unlikely. CEO Tim Cook did say that the company is working on projects that haven’t even been rumored yet, but those devices are probably something that is meant to have a wider mass-market appeal. Only time will tell if those plans include a wearable camera, but for now, GoPro probably isn’t losing any sleep over impending competition.

iPhoto Sucks: Replace it with these iPhoto Alternatives

What to do if Your New iPhone Won’t Activate