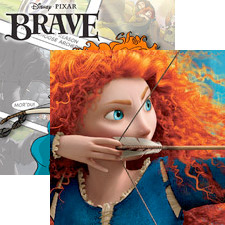 To support Pixar’s latest box office hit, Disney Publishing has released a pair of book apps that allow younger viewers to relive the story of Brave. Here’s my take on them both.

I’ll do my best to avoid spoilers in this review, out of respect for Pixar. Suffice it to say, there’s a big twist in the movie Brave, and if you haven’t seen the movie (or opened either of these apps) yet, I won’t spoil it for you here. For the youngest members of your family, Brave Storybook Deluxe tells the movie’s story in as nonthreatening a way as possible. Like Disney’s other “Storybook Deluxe” releases — which include recent movies like Tangled and Cars 2 — the app simulates a luscious, full-color storybook with original art based on the movie, as well as fun activities that kids enjoy. These include mini games, coloring, and jigsaw puzzles.

The big draw of the app is the storybook, which features a simplified telling of the film’s plot on unique, interactive, virtual pages. Swiping to turn a page reveals a screen where the left half resembles paper with printed words, and the right half looks like a painted image from a child’s picture book. If you have narration turned on, the app reads the story to you, highlighting each word as it goes along, so you or your child can follow the reading. If you prefer, you can dispense with the built-in narration and record your own, so your child can enjoy Mommy or Daddy reading them a story anytime they want. Swipe the screen a second time, and the word page slides away, while the painted scene fills out to a full-screen view. Along the way, you’ll find interactive secrets that reveal mini games or art you can color. Or if you prefer,  you can go straight to a section that groups all of these activities together. The mini games — particularly one where you tap on bullseyes as they pass by to fire arrows — seem geared toward older kids, as do the jigsaw puzzles, which have 25 pieces each. But the touchscreen coloring is obviously meant for the younger set.

My experience with the app was smooth, responsive, and enjoyable; it performed perfectly and met all of my expectations. It’s easy enough for a four-year-old to navigate, and if you’d like to expose your child to Pixar’s latest masterwork without the fear of scaring them with the film’s darker elements, I can’t imagine a better way of doing it.

Brave Interactive Comic takes the same basic concept as the other app, and advances it by a few years to around the eight-to-twelve year-old age group. Instead of a storybook, it’s a comic book — infinitely cooler for an older kid. Instead of coloring, there’s a section that teaches you how to draw several of the game’s characters, step-by-step. Instead of mini games, readers get periodic “extras” that consist of Pixar’s own pre-production art from the movie. The interactive comic itself goes into the film’s story in greater depth than a storybook can, allowing older readers to experience more of the movie’s drama and emotional gravity. (It’s not a word-for-word reproduction of the film, but it doesn’t skip over any parts of the story, like the storybook app does.) No art assets from the movie were used in creating the comic book. There are no film clips, or even animation stills. It’s all brand new material, created just for this app. It also takes the “interactive” part of its name seriously, doing a lot more than just digitizing a print comic book. The panels fade into view one at a time as you tap the right side of the screen, slowly filling the page. I rather like this approach, as it prevents you from looking at the bottom of the page and being spoiled for what’s to come. The panels also include some modest animated bits, as well as sound effects and music. What it doesn’t do is narrate the story for you; readers must actually, you know, read. Brave Interactive Comic doesn’t reinvent the wheel, but older kids — and grownups, too — will be fully engaged by it.

The only downside I found was that the Brave Interactive Comic app seems to be twitchier than its younger sibling. It’s not nearly as responsive as the Storybook Deluxe, tending to be a bit herky-jerky. Where Storybook Deluxe is fast and smooth, Interactive Comic is slow and complicated. There’s always a slight delay between one action and the next — such as panels appearing or pages turning — as if there’s an awful lot going on under the app’s hood, and it’s struggling to keep up with too many processes. But I will say it never got so bad that the app crashed on me. Since no storybook or comic can be better than the story it tells, both apps benefit greatly from Pixar’s famous attention to quality and artistic integrity. At its heart, Brave is ultimately about the complex relationships between mothers and daughters, though some of that subtlety will be lost on younger kids. For them, it should be enough that this is a Disney princess story, with plenty of action and excitement built in.

In the end, Brave Interactive Comic is a beautiful retelling of the film, specifically geared toward older children. If not for a few pesky bugs, I’d give it a perfect score as well.