You are here: Home / Accessories / Review: Vapor Dock for iPhone 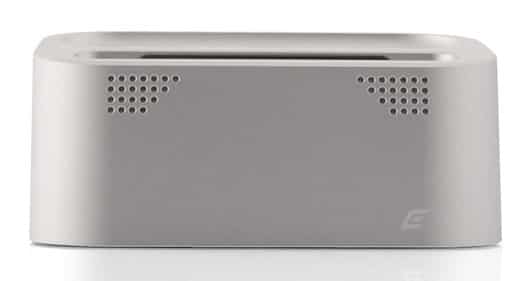 The Vapor Dock is the kind of high-end iPhone-charging dock that Jonathan Ive would approve of. It’s precision-cut from a single piece of aluminum, with an incredible attention to detail.

Created by industrial designer Jeff Sasaki, the Vapor Dock from Element Case is billed as an iPhone or iPod dock for the discerning user. Available in both silver and black, it fits most iPhones and iPods — even iPhones that are inside cases.

As most Apple fans know, Apple famously invented a new process for creating aluminum cases for their laptops when they created the ultra-thin MacBook Air. Their new method, which they dubbed “unibody,” was to precision-cut a laptop’s case from a single piece of aluminum, so there would be no seams, welds, or screws. It made for a much stronger frame than a traditional piece of metal would be capable of at such a narrow width. Sasaki used a similar technique to craft the Vapor Dock, and like Apple, he really thought through the design. There are a number of lovely little touches that Apple diehards will truly appreciate. Pick up the dock, and the first thing you’ll notice is its weight; its compact form factor weighs over half a pound, so it feels strong in your hands. It’s also incredibly solid, thanks to that manufacturing process, not unlike a small brick. On top is the slender socket where your iDevice slides in to rest; a metal collar there holds the iPhone’s 30-pin connector in place. Underneath, the cord from the connector comes out, and there’s a clever lip around the recessed area below, allowing you to coil and keep extra lengths from the cord there, if needed. There are also a pair of rubber grips on either side underneath, ensuring the Dock doesn’t move once you place it on a surface. A small metal plate up inside the dock is part of the collar that holds your syncing/recharging cord. A tiny hex-head screwdriver, which comes with the Vapor Dock, lets you unscrew the two screws that hold it in place, in case you’d like to install a cord longer than the one that comes with it. (The included cord is a couple of inches shorter than the standard USB cord that comes with your iPhone.) It’s not difficult to take the metal collar out, but you’ll want to do it on a large, flat surface; the screws are awfully tiny and would be easy to lose — and there are no extras included. A tiny slot at the back of the underside fits the cord and holds it in place.

One of my favorite features amplifies the sound from your iPhone’s speakers. iPhones have two tiny speakers on the bottom, and there are a matching pair of speakers on the Vapor Dock. The amazing part is that there’s no technology inside that functions like loudspeakers. It’s accomplished through precisely tuned air chambers that pick up the sounds from your iPhone’s speakers and make them significantly louder. I was very impressed with these pseudo-speakers; they truly do magnify the sounds coming from your iPhone — quite a bit more than I would think possible without circuitry of some kind involved. A pair of plastic inserts are included that allow your device to rest at the proper angle. One insert is thicker than the other, and there’s a corresponding slot in the dock’s backrest. iPhones and iPods without cases will generally work better with the larger insert, while devices with cases will fit more snugly with the smaller insert. The docking socket is plenty wide enough to accommodate most iPhone cases. There’s a large, padded spot behind the socket that looks perfect for holding earbuds or some other office item like paperclips.

The Vapor Dock doesn’t come cheap, with a retail price of $119.99, but for users looking for top-of-the-line products, money is no object. And a nice added value for American buyers is that all of Element Case’s products are 100% made in the USA. My experience with the dock suggests that it’s an incredibly rugged piece of hardware, capable of withstanding almost any kind of abuse, and it works brilliantly at doing what it’s designed to do.

Syncing and recharging my iDevice has never felt so right.