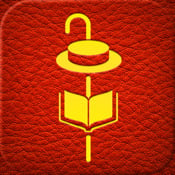 It starts with a curious windstorm...

Technically, The Fantastic Flying Books of Mr. Morris Lessmore is classified as a storybook for kids of all ages. In truth, it’s the kind of special product that belongs to a class all by itself. There’s simply nothing whatsoever to compare it to, no other storybook app that approaches its level of quality. And I am head-over-heels in love with it. Like Dorothy, Morris soon finds himself transported somewhere magical, house and all.

First, a little backstory:Â Morris Lessmore is a love letter to the joy of reading, created by animator and storyteller William Joyce and his friend and collaborator Brandon Oldenburg. Joyce has a number of major animation credits under his belt, including conceptual work on some early Pixar films, producer of Robots and Meet the Robinsons, and currently he’s working as co-director of next year’s DreamWorks Animation feature film Rise of the Guardians. Oldenburg has an impressive credits list of his own, designing everything from visual effects to title sequences for dozens of films, as well as illustration work in other mediums. Together with their crew at Moonbot Studios of Louisiana, they poured a ton of love and magic into this beautiful little fable. Morris' amusing personality begins to emerge when he meets a living book.

It’s worth noting that releasing alongside Morris Lessmore the app is a 15-minute short film (also available from the iTunes Store) that uses the same animations and designs, but takes the story deeper. Both app and movie find the title character whisked along on a journey through the power of story — a power that he finds personally redemptive, and is able to pass along to others. You get to play "Pop Goes the Weasel" for yourself.

The app unfolds in the form of a storybook that comes to life (talk about art imitating life) with narration that reads to you the words on the pages. Every page of the “book” offers something to interact with. Most of these interactions are creative exercises, like coloring or writing out words or playing the piano. Some others take on almost game-like qualities, requiring you to guide some sort of object (or person) to a specific spot on the screen, or piecing together a jigsaw puzzle. And you’re never left wondering what to do; if you don’t immediately interact with the page, the objects or people you can manipulate will soon give off a subtle blink. The end result is much greater than the sum of its parts, managing to make you feel as though you helped this story happen, and that it couldn’t have happened without you. One of the most genius interactions in the entire book.

The narrative alone would make for a fantastic bedtime story, if the app weren’t so… well, cool. Reading and experiencing Morris Lessmore is a delight to both the imagination and the senses, just as every good animated story should be, but this one manages to take the experience further by immersing you in it. The production design is light years beyond anything we’ve seen on the iPad yet, the character designs in particular owing no small amount of charm and personality to the likes of Pixar and Aardman. Even Morris' bed is made of books!

I experienced one glitch with the app where it would crash every time I reached a certain point in the story, though this isn’t uncommon for advanced apps that put so many system resources to work. I recommend closing all other apps before launching Morris Lessmore. Should you experience the same issue, a helpful menu is available that works like chapter headings on a DVD, allowing you to return to any part of the story with a tap. There’s also a main menu full of options that let you turn off the narration, the text, and/or the music, so you can experience the story however you like. The main menu is accessed as tabs on the far right.

Morris Lessmore is the kind of app that makes me believe in “magical” as an appropriate buzzword for the iPad — and it’s one of the first to ever do so. I can’t say enough good things about it, and I’m waiting with baited, drooling breath to see what Moonbot Studios comes up with next. This is a masterpiece of the digital age, and if you don’t own it, your iPad is incomplete.