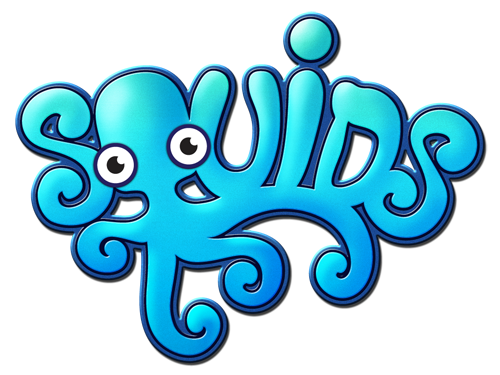 Tablets are slowly easing portable game consoles are the preferred platform for gaming. Tablets offer convenience (you don’t need to carry an extra device to play games) and a literally more hands-on way for controls. At this point, one of the factors where portable game consoles edge tablets is with game selection.

But this fact is now being addressed by many game developers who are realizing the new gameplay innovations they can put into established game genres because the touch controls tablets offer. One game that is doing this is Squids.

Squids was developed by Game Bakers, a new game development company that has a very good pedigree. It’s run by a group of former Ubisoft employees who have worked on top tier titles like Splinter Cell Double Agent and Tom Clancy’s EndWar.

Squids is a curious little animal – on the surface it looks like a game for kids with its impressively designed squid characters and cartoon backdrop. But underneath this cuteness is a very robust, and surprisingly deep tactical role playing game, one that is surprisingly challenging.

Squids uses a very cute design aesthetic. The characters are all fully realized and maintain the Squid theme quite consistently. Yes, the characters you see — Steev, Vahine, Clint, Kapono, Winnick, Vesper – are all squids. Game Bakers managed to turn these formless animals into really cute looking characters. The environments are also quite engaging, with really richly colorful backdrops. This is where Squids truly shines. The first few minutes I played with the game. I thought it was just a silly kids’ game where you direct the squid you’re controlling and hit enemies with them. But it’s more than that. Squids is like a mish-mash of different games. Think of it as a hybrid of an RPG, Angry Birds, a strategy game and a game of pool. It sounds like a mess but it’s not. Your Squids character have different classes – there’s a scout, a healer, a shooter, among others. You can improve their attributes by leveling them up using pearls and also with the accessories that they can equip. The battle system is simple but really deep. You fling the squids around, by touching one of the squids then pushing back. Just like in Angry Birds, the farther you push back, the longer they travel. When they hit an opponent they will also ricochet off them just like a cue ball when it hits other balls. This is where you need to strategize how you want the squids to hit their enemies. You can string together your attacks and even make combo attacks to damage multiple enemies. The battle system is turn-based so you really have time to think about your moves.

I find myself going back again and again and replaying levels to see if I can improve how I attack the enemies. It’s absolutely fun and not boring at all.

One weakness of the game is that there’s a feeling you’re left to your own devices. The instructions are quite sparse and doesn’t really detail the exact role playing elements of the game.

Squids is sold for $O.99 and has 21 chapters. Even though the price point is really attractive , I feel that 21 chapters is just too few for such an entertaining game. I’m hoping that Game Bakers will offer new chapters for free periodically to really bump up the value of this game.

Squids is a surprisingly well made game that delivers where it matters most – the gameplay. This is a deep, challenging game that you’ll obsess over for weeks to come.