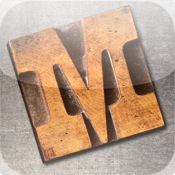 Ever heard of “letterpress,” aka the wood-tile printing press? It’s becoming an extreme rarity in our modern age, the hand-crafted beauty of it going nearly extinct.Â LetterMpressÂ for iPad isÂ the creation of letterpress enthusiasts who want to keep the artform alive.

The app’s designer, John Bonadies, crowd-sourced (via a wildly successful Kickstarter campaign) the acquisition of a number of real-world wood type blocks, which have been faithfully modeled and inserted into the app for users to enjoy. These tile collections are becoming increasingly rare in the age of laser and inkjet printers, and are very costly, but Bonadies and his team are scanning them at high resolutions for inclusion in the app, so that anyone can gain access to these rare assets. LetterMpress isÂ as much a useful tool as it is a means of preserving this genuinely unique artform. ClearlyÂ made with a tremendous amount of passion for the artform, the app will help you not only make some original (and useful) creations, but it’ll teach you all about the real-world art of the letterpress. Because the app works exactly like the real thing.

Everything about the app positivelyÂ dripsÂ with authenticity. The amazingly detailed letter blocks, the tools like “furniture” and “magnets” that help with precise tile placement, the trays for storing your galleys and projects-in-progress, and on and on…Â Everything works exactly the way that a real letterpress works. Want to access one of those storage drawers? Tap the appropriate icon and itÂ slidesÂ out into view. Want to lock down your blocks? Place your magnets and fold down the lockup bar to keep everything firmly in place. Ready to print? Select your paper and ink color, and wind the crank handle. I got more ambitious with my second attempt

It’s so beautiful, you can easily lose hours of time simply playing with it, without ever actually making anything. Once you’re ready to get down to business, there’s a full tutorial included that shows you about all of the parts of the letterpress and what they’re used for. There are little tips and tricks you’ll need to learn, such as double-tapping to set a tile, or triple-tapping to remove it completely. Or how to pinch-to-zoom in on the press itself, or switch it so you can increase or decrease the size of your blocks via pinching. Look, blatant self-promotion for my next novel! (Needs tweaking. My name's way too big.)

Precision is almost a requirement, but it isn’t easy to achieve. The sensitivity of the controls can be a bit twitchy; there were times I felt the need to break out my stylus to achieve the kind of precise control I needed in order to get those blocks in just the right spot. Once you get the basics down, you can get really artsyÂ by conducting multiple runs with several different colors and tile placements on a single piece of paper.Â When you’re satisfied with your work, you have the option of exporting your creation to your iPad’s photo gallery.Â A recent update added new fonts and symbols to the library of available blocks, and Bonadies promises more updates in the future with additional tile sets. I can’t recommendÂ LetterMpress for casual users looking for a breezy little creative tool. This is painstaking work that can take loads of time, particularly before you’ve surpassed the rather steep learning curve. But if you’re willing to invest the time needed to become skilled at its use, you’ll be rewarded withÂ one of those rare apps that uses the iPad to its fullest potential. It’s a mind-boggling marriage of the old-fashioned and the high-tech that manages to elevate both.

A magical feat if there ever was one.