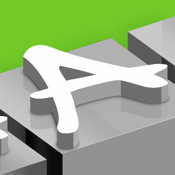 I love finding apps that really take advantage of what the iPad can do. I’m also a proud-and-out-loud font geek. iFontMaker is a mind-blowing app that scratches both of these itches in wondrous, sublime ways.

As a font lover, I’ve always dreamed of being able to create my own fonts. But every web app or computer program I’ve ever found over the years has been incredibly complicated. Granted, the process of creating a font is a laborious one; we’re talking several dozen distinct characters that you have to illustrate from scratch. But I’ve finally found a means for making great fonts that simplifies the process and actually makes it fun. You can tell a great deal of thought and planning went into iFontMaker’s creation, because it does so many things just right. When you fire up the app, you’ll be presented with your font creation screen. Most of the screen is given to a large amount of space for drawing out your characters or “glyphs” as they’re called. At the top of the screen, you’ll see all of the glyphs in your current font shown side-by-side. Tap any one of them to edit it, or create an entirely new glyph.

Across the very top and bottom of the screen are your options, and it’s very smartly designed this way so that you have one-touch access to every tool and setting you need. You can choose from a small selection of existing fonts as guides that you can draw overtop of, or you can leave the drawing area completely blank and make something entirely out of your imagination. Adjustments are easily made for things like the width of your lines, the type of brush you’re using, and the guidelines on the drawing grid. Tweak everything out to your heart’s content, and create something truly original. One of the best parts of the app is the line editor. After you’ve drawn your glyph, switch over to line-edit mode and you can move, stretch, twist, and enhance your lines any way you see fit. Without this option, iFontMaker would be useless, but it works brilliantly. You can even pinch to change the size of your lines or your entire glyphs. The app uses Unicode for character sets including English, Latin, Greek, Cyrillic, Thai, and Japanese. More are being added all the time.

Once you’re satisfied with your collection of characters, there’s a button in the top right corner that will send your work straight to 2ttf.com, the manufacturer’s website, where it’s automatically compiled into its own very real True-Type font. (Here’s my first font, modeled after my own scribbling.) Completed fonts are also added to the 2ttf Gallery, where anyone can peruse the fonts created by iFontMaker owners, and download any of them they like. And here’s a nice touch: 2ttf.com even provides short URL links to the individual fonts, making it extra easy to share them on Twitter or Facebook. (You have the option to set your font to “private” if you’re not in a sharing mood.) On the downside, the app crashed on me quite frequently. There seems to be a bug that crops up when you try to move a line or an entire character. At least half the time I did this, the app would crash. Thankfully, it auto-saves your work frequently, so the place I left off was always there waiting for me when I fired up the app again. I’m sure this crashing bug will be sorted in a future update.

It’s theoretically possible to create any kind of font you can imagine with iFontMaker, but I found that the app isÂ best suited for making handwriting apps. The human finger just isn’t equipped for manipulation with the kind of precision required for the straight lines of a more modern and complex font. I gave it a go, as you can see in one of the screenshots, and while not impossible, it was incredibly painstaking work. A single character took almost an hour to get just right. I think a stylus might come in handy for making these kinds of serif or sans-serif fonts.

Even with the repeated crashing, I just adore this app, and it’s earned a permanent home on my iPad. I generally frown on any mobile app that’s more than $5, but this is one time when $6.99 is worth every penny.