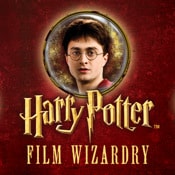 Being fascinated by all aspects of the creative process,Â I’m a total sucker for movie making-of books. And boy, is this one a doozy. Covering numerous aspects of the production of films 1 through 7 (along with a hint of 8), Harry Potter Film Wizardry was one I couldn’t wait to sink my teeth into.

Every page of this gorgeous tome zeroes-in on one single aspect of the production, be it an actor, a set, a production department (such as costumes or visual effects), or an important prop (like the Marauder’s Map). It’s full color through and through, chocked with behind-the-scenes photos, makeup tests, set construction, production design blueprints, conceptual art paintings and renderings, and so much more. The text is a testament to “fan service,” as much of it is written by — or comes directly from the mouths of — the people that made these remarkable films, who share the hows and whys and whens of everything about the process. The actors discuss their memories of filmmaking over the years. The directors and producers share the considerations and reasons behind why they made the decisions that they did. Production crew provide insights into just how thoroughly thought-out the visual and physical aspects of the Potter universe had to be. Author Brian Sibley does a fabulous job of compiling all of this material together and filling in the blanks. (Sibley is quite the film and fantasy scholar, having written dozens of these behind-the-scenes books, including numerous volumes about The Lord of the RingsÂ and The Chronicles of Narnia, among others.) Rich in details that Potter fans will hungrily devour, inside Harry Potter Film Wizardry, you’ll learn about the worldwide talent search that resulted in Daniel Radcliffe being awarded the title role. You’ll hear about the tragic loss of Richard Harris, and how director Alfonso Cuaron cast Michael Gambon as the new Dumbledore for Prisoner of Azkaban. You’ll read about the agonizing decision the filmmakers were faced with when it became clear that the seventh book contained too much payoff to fit comfortably into one film.Â It’s deeply fascinating stuff, and if you’re a Potter fan or a film buff, it should be required reading. Harry Potter Film Wizardry the app containsÂ all of the content of the printed book, but it’s augmented with multimedia content. Some of it is pulled straight out of the films, while other bits were lovingly crafted just for this iOS app.Â There are dozens of video clips inside, some of them full-length trailers, others just a few seconds long. I greatly appreciate that the clips come with the app as part of the download, instead of being streaming videos cued up from some server somewhere (meaning you don’t have to be online to enjoy the app). There’s almost no delay between selecting a video and when it starts, and most of them are very good quality. There are also a number of animations made especially for the app that give you the chance to examine objects deeper or view progressions such as Professor McGonagall changing into a cat. One of my only gripes with the app isÂ that most of these “interactive” portions of the book are nothing but animations that you control by swiping back and forth. For example, the printed book includes a realistic replica of the Marauder’s Map, which you can unfold and examine to your heart’s content. The app, by contrast, has a virtual version of the Map which is one of these swipe-to-animate things, yet it’s surprisingly limited in what it lets you see. The Map unfolds, then zooms in on a couple of spots where you can see the in-map versions of Harry and others magically walking around Hogwarts (as seen in Prisoner of Azkaban), and then zooms back out and folds itself up again. How cool would it have been to have a fully interactive Marauder’s Map that you could pinch-to-zoom, unfold each flap at will, and generally manipulate like it was the real thing? The app’s pages are presented essentially as a slideshow, displaying pages from the printed book as meticulously compiled images. You can get full-screen views of most of the pictures just by tapping on them, and they’re all very high quality, though I wish that the interactive animations and other images were zoomable as well. J.K. Rowling’s own hand-drawn schematic of the Hogwarts grounds is one such image included in the book that begs to be inspected up close. The app isn’t without glitches. Page-turning is far too touchy for my taste; the slightest tap can cause the page to turn when you never intended it to. I spent a not-small portion of my experience with the app turning pages backwards because I hadn’t meant for them to move forwards. I hope that a future update might rectify this glitch. Those with eyesight difficulties would have appreciated the ability to adjust the size of the text, too, though I suppose this couldn’t be helped. On the plus side, there’s a handy menu that’s always one tap a way, and it provides scrolling thumbnails that lead to every page in the book, all of the content related to one particular movie, or even direct access to some of the multimedia videos and animations (though certainly not all of them).Â $13 might seem steep for an iPad app, but it’s more than reasonable when you consider that the printed version of the book retails for $40. The content of the book alone justifies the price, but all of the iPad exclusive parts are really the icing on the cake. The high quality of the images and all of the video clips and animations make this one of the largest apps I’ve yet encountered at nearly a full Gigabyte in size, so be sure you have ample space available for it on your iPad before downloading. Because for true Potterphiles, Harry Potter Film Wizardry is an absolute must-own.