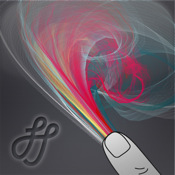 My "artistic" interpretation of the sun.

Simple and addictive. These are the two words that keep coming to mind when trying to describe Flowpaper. I’ve really never seen anything quite like it.

Pick the color of your canvas. Start drawing with a single finger, and lines will appear, following what you trace. But those lines quickly take on a life of their own, swerving about and flowing like waves. Make simple strokes and the lines will look a lot like sketches. Move slower, or even hold your finger in place at the end of a line, and the curves will continue to flow all over the screen. It’s a mesmerizing effect that Apple itself would define as “magical.” Can you tell this is supposed to be a volcano?

And rightly so. Flowpaper exemplifies everything that the iPad does well — the app makes it simple and intuitive to create something complex and beautiful. (There’s also an iPhone version available, but the screen size of the iPad really lends itself better to what this app can do.) Technically, it’s an artistic tool, but it feels more like an interactive toy, because you’re only partly in control of what happens on the screen. The app does the rest.

I couldn’t begin to describe the physics algorithms involved in making Flowpaper draw its enchanting art. But just watching it in action is enough to convince you that something dazzling is happening under the hood. I’d describe it as akin to watching a fractal grow in real time. When I first started up the app, I was initially surprised at just how minimal the settings are that define how the gridded lines react to your touch. There’s a modest selection of brushes, most of whichÂ give you a single color to draw with, while a handful of others mix multiple colors for a hypnotic rainbow effect. A trio of sliders define the length, flow, and opacity of the lines you draw. I could explain what these settings do, but playing around with them and seeing what effect they have is a big part of the app’s charm.

Flowpaper‘s not perfect. For all that spellbinding value, I found myself wishing repeatedly that more brushes and colors were at my disposal. And I experienced several crashes, always immediately after saving my images (which fortunately didn’t prevent the images from being saved). But my biggest gripe is that the “Undo” button is all but impotent. It takes just one step backwards; no more. If you draw more than one line that you want to go back and change, you’re screwed. You have no recourse except to start over from scratch.Â For an app that encourages so much experimentation, it’s really a bummer that committing yourself to one design path is an unchangeable decision. Just a doodle... playing around with spirals.

Flowpaper has its own Flickr group, where budding (or professional) artists upload their pieces for everyone to see. I love to see an entire community spring up around an app that encourages creativity this way; I just think that’s brilliant. And being able to see what others have made using the app is more than enough to inspire you to go spend some time drawing yourself. In all honesty, I found it hard to stop playing with the app long enough to write this review. It draws you in and it’s hard to put down.

I’m not sure I could see a professional artist using this app alone to create a truly great pice of art, though it could be useful alongside other art tools. But that’s kind of beside the point. Flowpaper is best approached as a toy, albeit a remarkably compelling, addicting one. And the $.99 price is certainly right. Even the least artistic among us will find it impossible not to have fun playing with Flowpaper.