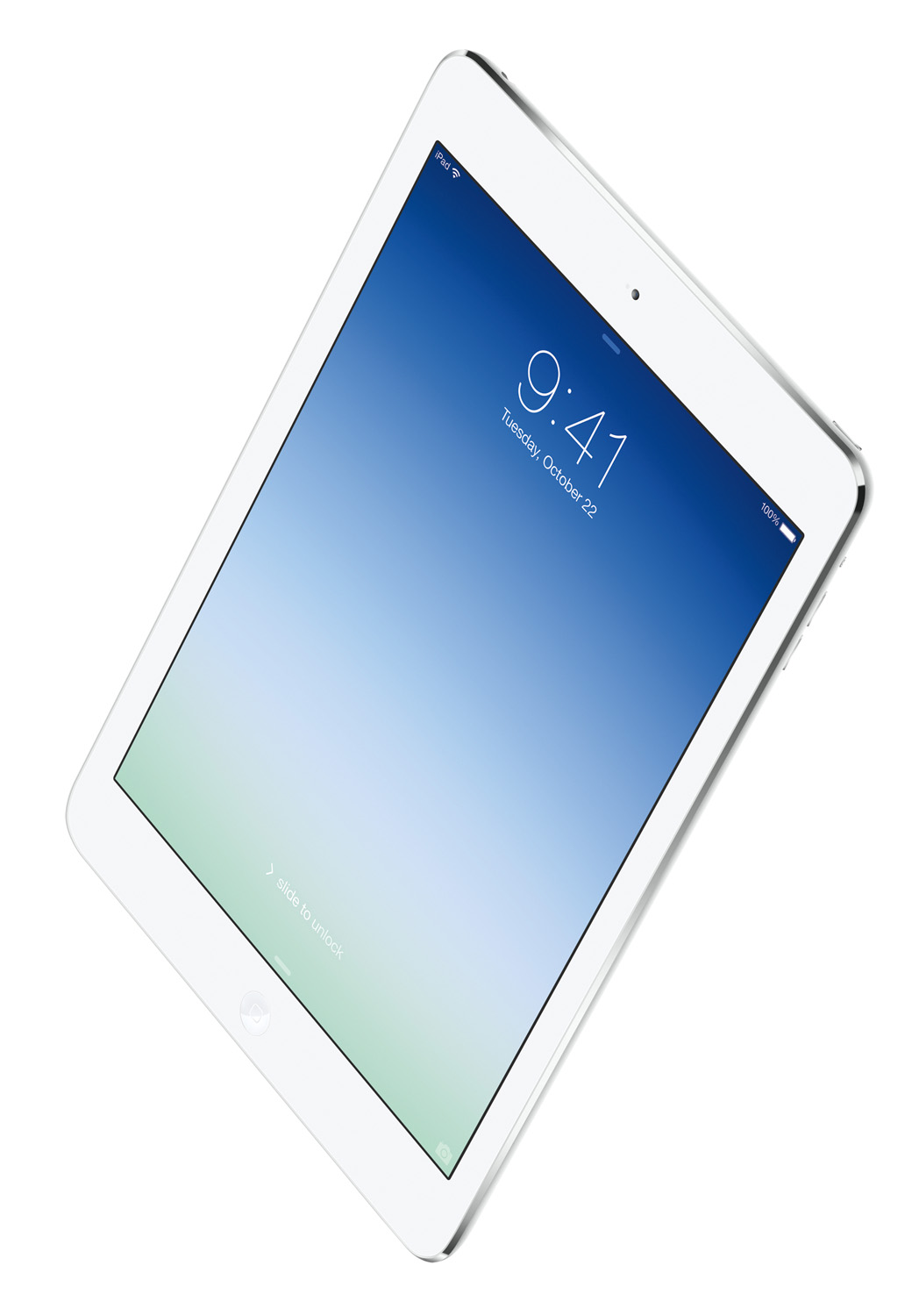 Apple’s latest (and last of ’13?) keynote event unveiled the next-gen, ultra-thin, Mini-inspired “iPad Air.” But there was loads more revealed and shown off at this massive event. This is what you need to know. After shocking the crowd with the announcement of OS X Mavericks being a free upgrade, there were no real surprises left up Apple’s collective sleeve. The biggest news, of course, was the expected 5th-generation iPad, and it delivered exactly what everyone thought it would. It’s a full-on replacement for the 4th-generation “iPad with Retina Display,” which is being retired, but it’s got a fancy new name to distinguish itself: iPad Air.

As suspected, the iPad Air is a considerably thinner and lighter device that’s more powerful than any iPad that came before, while taking its design inspiration from the thinner side bezel look of the iPad Mini. It doesn’t boast the iPhone 5S’ fingerprint sensor, but it’s got a very similar core structure, with the same A7/M7 chip set as the 5S. It has the same 9.7″ Retina display as the last generation iPad, but everything else about its hardware design has been completely redesigned.

Here’s a breakdown of the iPad Air’s new dimensions, compared to the 4th-gen iPad:

Apple describes the iPad Air as a completely new experience, even for those familiar with iPads. It’s ridiculously thin and light, and yet Apple’s precise, unibody construction ensures that it’s as durable as ever. Despite the smaller form factor, the iPad Air is much more powerful than past iPads, and yet it maintains the same 10-hour battery life. It shoots 1080p video (with 3x video zoom) and 5MP photos. It’ll be available November 1st at the same prices that all past iPads have started at ($499 for 16GB WiFi, $629 for 16GB wireless), running from 16GB all the way up to 128GB. Apple is not taking pre-orders for the iPad Air.

The only other remaining legacy iPad model Apple will continue manufacturing is the old standby, the iPad 2. I’ve seen several pundits point out that the iPad 2 is sticking to its existing $399 starting point, and I have to agree. Apple always reduces prices on old models when it introduces new ones, yet the iPad 2 isn’t getting a price drop? Seems like a pretty big oversight.

A new iPad demands a new Smart Cover, amiright? Apple is ready to supply you with new Smart Covers and Smart Cases, which will sell for $39 and $79 respectively. The polyurethane Covers come in bright colors similar to those used by the iPhone 5C, while leather Cases (which cover the entire rear of your iPad) are a bit more sophisticated, with color tones like Brown, Beige, and Black, which are evocative of the iPhone 5S. No major surprises here; the new iPad Mini matches the overall design specs of the original, but adds in some extra power and that long-awaited Retina display.

Here’s something I find interesting. The new iPad Mini is the first device Apple has outfitted with a Retina display that has the same pixels-per-inch as the iPhone. The iPhone has 326ppi, while the Retina iPad has 264ppi (the reasoning being: you hold an iPad further away from your eyes than you do your iPhone), and MacBook Pro displays are 220ppi or 227ppi, depending on the model. The new iPad Mini boasts a 326ppi display. Does Apple believe users hold an iPad Mini closer to their face than users of the larger iPad?

The “iPad Mini with Retina Display,” as Apple insists on calling it, is a teeny bit deeper and heavier than its predecessor, but impressively, it matches the overall internal specs of the iPad Air. Same camera, same resolution, same chipset, same everything. It’s exactly what it claims to be: a miniature version of the iPad.

The new iPad Mini comes in the same colors as the iPad Air, will sell starting at $399, and according to Apple it will be available “later in November.” Whatever that means. At long last, Apple took the full wraps off the new Mac Pro, giving all the details you could ever want, as well as pricing and a release window.

The presentation was punctuated with stories from some professionals Apple gave early Mac Pro access to, and as you’d expect, they all loved it. They included professional filmmakers, photographers, and record producers — one of whom commented on how astonished he was at how silently the Mac Pro runs, making it perfect for studio use.

Full tech specs are available here, but it comes decked out with all the next-gen technologies you’d expect (and then some). The Mac Pro will be available sometime in December, in quad-core and 6-core configurations, starting at $2,999 and $3,999 respectively. More not-unexpected news: Apple has updated the MacBook Pro lineup — both 13″ and 15″ models — with its latest hardware advances. Both models are predictably faster (thanks to the new Intel Haswell and Crystalwell chips), thinner, and lighter than before. Which is saying something, considering how thin and light last year’s MacBook Pros already were. Even better, both models are getting $200 price drops. The 13″ MacBook Pro is now $1,299 while the 15″ is now $1,999, and they’re both available in stores and online immediately.

The iLife apps suite — aka, iPhoto, iMovie, and GarageBand — has been completely redesigned to fall in line with iOS 7’s simplified, non-skeuomorphic design philosophy. What’s more, we’re talking about every version of those apps: iLife for Mac, iLife for iOS, and iLife for iCloud, all of which are now seamlessly integrated. So you can start work on one device, continue on another, and finish online at icloud.com if you want.

Apple talked up a major new feature of GarageBand that allows you to choose a sophisticated AI drummer to play along with your compositions in realtime. There are several drummers to choose from, and more available via in-app purchase, and each one will bring a different style of drumming to your creations. I can’t decide if this kind of A.I. musician is awesome or kinda creepy.

All three iLife apps are now free with the purchase of any new Mac or iOS device. They’re also upgradable for free to existing users, starting today.

But iLife isn’t getting all of the software love. iWork apps — Pages, Numbers, and Keynote — have all gotten similar overhauls and redesigns, and all will work integrated with one another over the cloud, just like iLife. There’s realtime collaboration available with all three apps, too, that works regardless of which device each participant is using. This is some seriously cool stuff, and might finally signal Apple being ready to take on Microsoft’s Office suite in earnest.

As we previously reported, Mavericks is a free (and fairly major) OS X upgrade, and it’s available in the Mac App Store right now. Go get it!

At today’s event, demos were shown explaining how Mavericks has some impressive new innards that upgrade your hardware, regardless of what Mac model you’re using. There’s tons of stuff going on under the hood in Mavericks that compress memory, conserve power, better battery efficiency, and loads of other optimizations that should deliver a significant performance boost to all users.

The Mavericks freebie was the only real surprise of the event, but that makes the new iPad Air no less impressive. It’s a super-slick device that should lead to even greater iPad adoption than ever before. The Mac Pro is impressive, too, and I love all the thoughtfulness Apple’s poured into the new iLife and iWork apps.

So… Does this mean no iWatch this year? Probably. Some pundits predicted that Apple TV would get a significant upgrade today, and that didn’t happen. It could still be yet to come. There’s nothing to say Apple won’t hold one more event before the year is out, though our proximity to the holiday shopping season would suggest that this was probably it.