You are here: Home / Accessories / The Search For the Perfect Stylus May Be Over 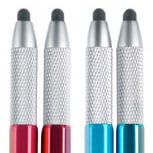 I’ve reviewed many a stylus, but have yet to find that perfect, magical accessory that perfectly mimics a pen or pencil. That’s because no one has cracked the stylus user holy grail: a fine-point tip. But an already-successful Kickstarter project could be the answer to my (and your) prayers.

The reason no one’s come up with a fine point tip for a stylus yet comes down to simple physics. Standard capacitive touchscreens — including those used by Apple — respond only when the finger or stylus touching them presses down to create a circular area at least 4 millimeters in diameter. If the circular area where the screen is being touched is less than 4mm, your device won’t respond. This creates a problem for stylus makers who want to create something that looks, feels, and behaves like a pencil or ink pen, because the sphere at the tip of a standard ball point pen is somewhere between .5mm and 1.2mm. Until capacitive touchscreens learn to recognize smaller touch spaces, we won’t have what Joe Q. Public expects a “fine-point stylus” to be. One thing no one’s tried yet to get around this problem is a rubber stylus tip that matches the 4mm size that the screen requires. That’s where Steve King’s Hand Stylus comes in. Not only does it have a 4mm tip — the narrowest rubber tip ever made — it solves a number of other problems associated with standard styluses. (I learned all this cool science stuff about styluses from King’s savvy Kickstarter FAQ, by the way.)

For example, the Hand has a retractable tip, and that wasn’t added as an afterthought. King made it that way because sunlight, over time, causes rubber to become hard and brittle, until it eventually crumbles. Having a retractable tip solves this issue almost completely (unless you always use your stylus in direct sunlight), as well as keeping the tip safe from damage caused by dropping or squishing (as in, in briefcases or purses). Even the act of retracting and extending the tip is made useful for extending the life of the stylus, since it rotates the tip slightly each time you do it, ensuring that the wear and tear you put on it is spread evenly over the whole thing. Of course, nothing lasts forever, so King’s company offers a six-pack of extra tips for $4.95. As for the Hand stylus itself, its suggested retail price is very competitive for a high-end stylus: $29.95.

I’ve spent a lot of time talking about that tiny rubber tip, but the Hand has several other niceties as well, including a thatched metal grip, a six-sided barrel that makes it feel more like a No. 2 pencil, and a removable pocket clip that’s made of stainless steel so that it will stick to the Smart Cover on your iPad.

I’ll reserve judgment until I try it out for myself — and watch for Apple Gazette’s special, pre-release review of the Hand Stylus soon — but I’m highly impressed at the enormous amount of thought and care inventor Steve King put into this thing.

At the time of this writing, the Hand’s successful Kickstarter project has already met its pledge goal more than seven times over — with more than two weeks to go.