You are here: Home / Feature / Take a Look at the Apple Solar Farm that Powers iCloud 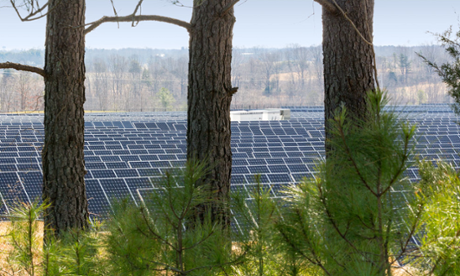 Apple is no stranger to criticism, especially when it comes to its carbon footprint and its efforts (or the lack thereof) to be more environment friendly. At this point, however, even the harshest critics cannot deny that the “lack” is not that huge anymore. Apple has been making considerable steps in going green, from the launch of its global recycling program to Apple Stores lessening their carbon footprint. Even its data centers are designed to minimize impact on the environment.

Journalists were recently invited to the North Carolina data center, where they were treated to an impressive sight: 55,000 solar panels lined up neatly in a 400,000 square meter field, soaking in the sun and converting its rays to electricity.

It seems Apple is indeed going through with its commitment to doing its part, environmentally – even activist group Greenpeace has lauded the electronics manufacturer, putting it ahead of Google and Facebook in this regard!

As for the solar farm, The Guardian quotes Lisa Jackson, the vice-president of environmental initiatives:

“We know that our customers expect us to do the right thing about these issues…If you are using your iPhone, iPad, Siri or downloading a song, you don’t have to worry if you are contributing to the climate change problem in the world because Apple has already thought about that for you. We’ve taken care of that. We’re using clean energy.”

It is important to understand that as huge as the solar farm may be, it is still not enough for the Maiden data center to stay completely off the grid. It is still hooked to the power grid, as weather conditions may not always allow the solar farm to generate enough power.

Here is a video clip of the solar farm in Apple’s North Carolina data center.

A Peek at Apple’s Other Facilities