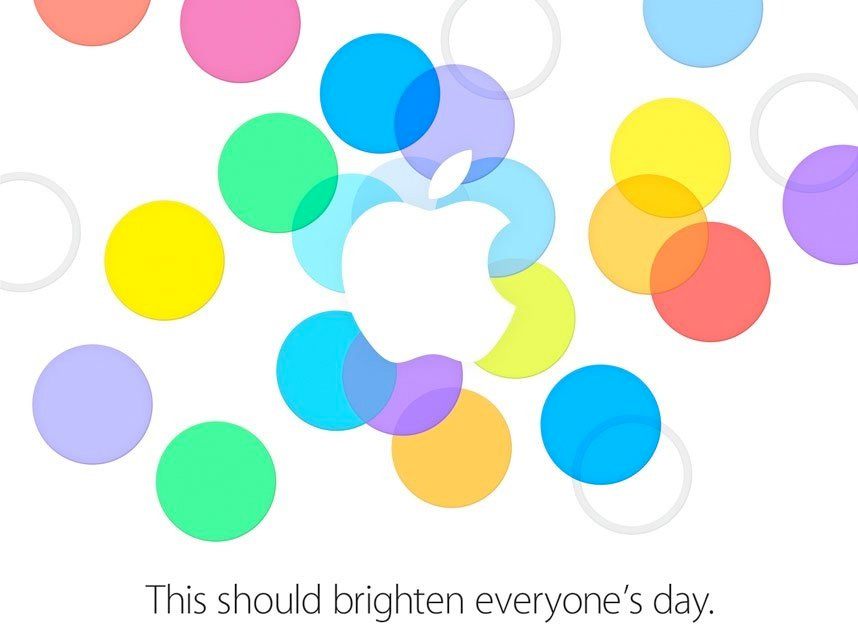 It’s on! Apple has sent out invitations for its long-suspected September 10th media event/keynote/PR/circus/thing, and here it is. What do you suppose Tim Cook & Co. will unveil?

Mark your calendar for Tuesday, September 10th, at 10:AM PST.

The rumormill has been saying for months that this is the event where Apple will introduce the successor to the iPhone 5, and that certainly fits Apple’s established pattern of refreshing the iPhone annually in late Summer or early Fall. Apple isn’t as good at keeping secrets these days as they were in Steve Jobs‘ heyday, so it’s all but a given that the new device will be called “iPhone 5S.” Whereas the “s” in the iPhone 4S stood for Siri, the “s” this go-round is expected to stand for “scanner,” as in the long-awaited fingerprint scanner tech Apple’s been perfecting.

There’s also talk of a new, lower-cost model with a plastic shell, known for now as the “iPhone 5C.” The press believes the 5C will be offered exclusively in China, where Apple is eager to catch up to local competitors. (We’ll circle back to that in a minute.)

But is the iPhone 5S/5C all Apple will bring to the keynote? Is there nothing but new iPhones up their collective sleeve?

Well, iOS 7 has been Apple’s big story of the year, so it’s a given that Apple will show off the latest additions and refinements to the new OS, and most likely announce when it will become available to consumers. Aside from that, there are plenty of rumors going around about what else Apple might show off. We may get more information on the new PowerMac. There could be new details on OS X Mavericks. A newer rumor from just this week suggests that they may upgrade the Apple TV box.

Will we see the 5th generation iPad, with its sleek, new, iPad Mini-inspired form factor? Unlikely. Apple’s going to save this for October or November, to capitalize on the holiday rush. iPad is always a hot commodity at Christmastime.

The dream of many a geeky little heart is that Cupertino will finally unveil the iWatch. It’s not like it’s a myth; we know for a fact that it’s been in development for a while now. Competitor Samsung just today announced their “Galaxy Gear” smartwatch, obviously trying to steal Apple’s thunder (though early impressions suggest the thing is heavy and not all that intuitive). It goes without saying that Apple will come up with a smart, beautiful, intuitive device, but they could score some serious points with consumers by setting iWatch’s price tag lower than the Gear’s $300. (Samsung doesn’t seem to get that it’s going to be hard for consumers to swallow the idea of a wristwatch costing about the same as a 7″ tablet.) But this too seems like an announcement Apple is most likely to save for a pre-holiday event — if it’s debuting this year at all.

What about iTV? Apple’s taking its time to get the TV set of the future just right, so getting to see the mythical flatscreen next week ain’t happening.

What else can we glean about the event from Apple’s invite? Well…

“This should brighten everyone’s day.”

Apple just loves to drop cheeky little hints about what they’re going to announce using the artwork and taglines on their event invitations. They’ve done it time and again. So what does this one mean?

As these things go, this invitation is not terribly tantalizing. Just a collection of multicolored, translucent dots, and the aforementioned tagline. The colors look a lot like the bright, standard new colors in iOS 7. They could also be a nod toward the expected new iPhone hardware colors. But dots? Hmm. In case you’re wondering, there are 25 of them on the invitation. But sometimes a dot is just a dot, so maybe we shouldn’t read into it.

Then there’s the text. Apple’s invitation taglines often include a double meaning, and the word “brighten” is the one that jumps out at me. Is Apple introducing brighter, more vibrant screens on the iPhone 5S? That seems unlikely; Apple has always prided itself on having great displays, and the iPhone’s screen in particular, with its high pixel count, is still mighty impressive. (Never mind that competitors have upped their pixel counts even higher in response. It hardly matters since the human eye is already incapable of discerning individual pixels at the iPhone’s 326 ppi-per-inch standard.)

There’s another possibility, though. The phrase “brighten your day” typically means to make someone’s day better by giving them a surprise. A smile, a present, or your undivided attention. It might even mean something new, something they’ve never seen before. If Apple is planning to introduce a new class of product on September 10th, then the iWatch is the obvious choice.

There’s a twist that I don’t think anyone saw coming. Just hours after the September 10th event in Cupertino, Apple is holding a second media event on the 11th — in Beijing, China. Word has it that Tim Cook’s been trying to nail down an iPhone agreement with China Mobile, the largest mobile carrier in China, for ages and this second event, likely streamed live from Cupertino, will almost certainly herald that announcement. It’s anyone’s guess what else could come from the China event.