You are here: Home / iPhone / How Much Is a First Generation iPhone Worth Today? 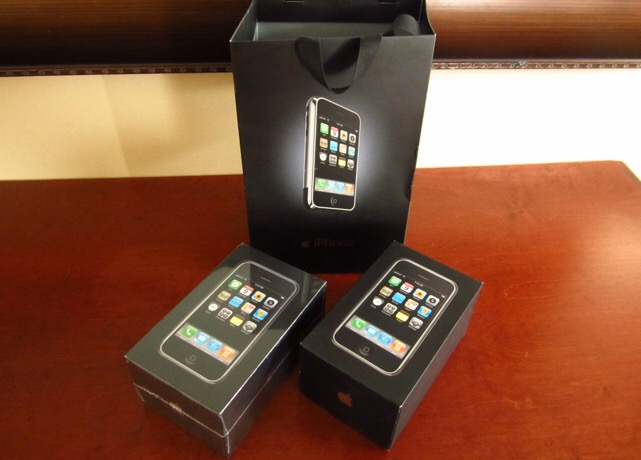 Sure, the iPhone 6 and 6 Plus are the talk of the town these days, both good and bad being brought out into the open. But why go with the flow when you can be unique and show off an original iPhone? You know, those first generation iPhones that changed the way we used mobile phones. The thing is, while it’s a piece of cake to find the most recent iPhone models, the same cannot be said of the original iPhones. They’re quite rare, as it usually is he case with first gen models. Even used, first generation iPhones are not easy to find.

This lucky guy got his hands on a “rare collector’s set” of two first generation iPhones from eBay yesterday.

Spotted by TUAW, the eBay listing included two first generation iPhones, both in “pristine” condition. One is still in its sealed box – can you imagine that? – while the other is “slightly used”.

So how much does a first generation iPhone cost these days? According to the eBay seller, those two, both the 8 gigabyte model, are worth around $25,000.

I’m not a collector though I would love to have one of those iconic phones just for the heck of it, but at that price, I might have to revise my description of the guy who bought the phones. Lucky? Maybe. Sucker? Perhaps.

If you had that kind of money would you have splurged on the collector’s set? I think I’d rather get a new iPad Mini and MacBook Air. Oh, and I might as well throw in a Mac Mini while I’m at it, and still have Christmas money left over.

To the iPhone 6 Detractors: 4 Reasons Your Argument Is Invalid