You are here: Home / News / Apple’s Textbooks a Hit 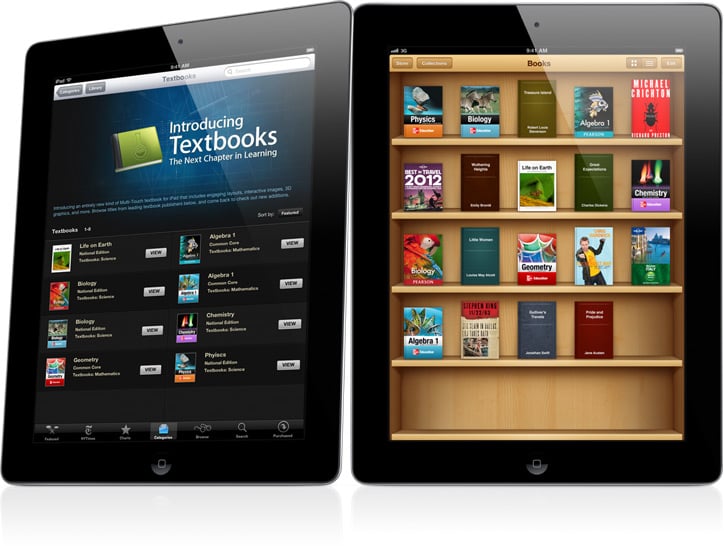 Apple’s inexpensive new textbooks were downloaded 350,000 times in their first three days. Take a second and let that number sink in. The education revolution is in full swing.

Global Equities Research announced this number today, along with the news that Apple’s new Mac app, iBooks Author, was downloaded 90,000 times in its first three days. That translates to 90,000 potential authors of new books for the iBooks store.

I remember how right after the news was announced on Thursday, reactions were all over the map. True believers — including myself –were ready to jump on the digital textbook bandwagon, while plenty of naysayers declared that “Apple did not just reinvent textbooks.” Well, sorry to say, told you so!

Wait, that’s wrong. I’m not sorry to say it. How is it not a complete no-brainer that of course students and teachers are going to jump into digital textbooks when the printed versions can typically cost upwards of $100, while Apple’s versions max out at $14.99. And Apple’s textbooks come with built-in interactivity, videos, tools, audio, and more. It’s learning for the 21st Century, and it’s long overdue. Here’s hoping this is only the beginning, with a full-on overhaul of the entire education system on its way.

I’m thinking a lot of those naysayers must’ve been college campus bookstore owners. Because they’re pretty much the only people who stand to lose out in this new ecosystem. (Even the textbook publishers are on board with Apple’s new hotness, so you can’t say they’re hating it.)

Of course, this is an unofficial estimate made by GER, so Apple’s actual download numbers could be different. Don’t expect Apple to announce their sales numbers anytime soon; the Cupertino-based company is notoriously secretive about such information.