You are here: Home / Mac / USB-C Hubs Are Garbage: Here’s Why 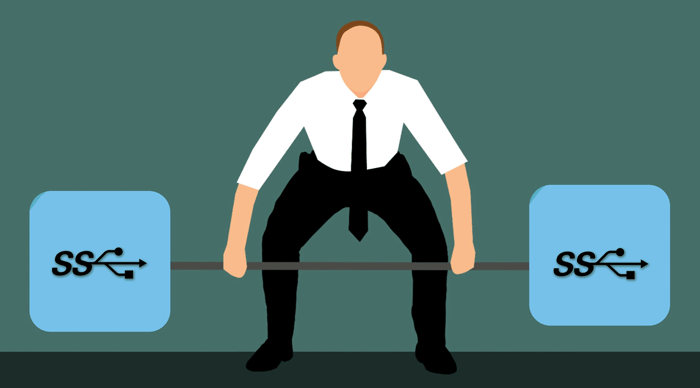 The USB–C connector has been on the market for some time. They’ve been part of the MacBook since 2015, and the standard has existed for far longer. So why does it seem like all USB-C hubs are somewhere between barely functional and basically trash?

USB Type C, or USB–C to its friends, is the newest USB connector standard. It replaces all the USB connectors that came before it, so it supersedes all the Mini and Micro cables of older standards. USB–C also supports the highest data and power transfer rates of the USB 3.1 Gen 2 standard, cranking up as high as 10 Gbps and 100 watts. It’s the most robust, durable, and powerful USB connector type available.

It might be less obvious to consumers. You need to shop carefully and look for the specific logos stamped on the cable end. Look for the USB 3.1 Gen 2 Superspeed trident with the 10 Gbps branding.

This is already getting complicated. And if you’ve ever bought cheap electronics from Chinese fabs, you might be able to identify some failure points already.

So if USB–C is the biggest, baddest new USB connection standard, why isn’t it better supported by the marketplace? Where are all the awesome USB-C hubs? Mostly, it comes down to a much smaller market, lack of competition, and OEMs’ relative inexperience with the USB 3.1 standard.

In addition to its new power, USB–C is the newest connector type on the market. While you’ll find it on some devices, very few computers offer solely USB–C ports. Apple’s MacBook and MacBook Pro are the notable exceptions, although the USB–C connectors on those computers actually might support Thunderbolt 3, depending on the model. The connector type has begun its slow diffusion through the peripheral market, but it hasn’t made much of a dent yet.

But replacing a connector as popular and widely used as USB is bound to take a long time. That kind of change doesn’t happen quickly. So adoption of Type C was always going to be more of a trickle than a flood: a few devices at first, starting with speed-sensitive applications. Eventually, Type C will take over completely, but it’s hard to predict when that day will come. Right now, that day seems distant.

This limited adoption means that there’s not yet a huge demand for USB–C hubs and devices. Since few devices support the standard, most folks haven’t really caught on yet. Sure, Apple supports it on their Macs. But Macs make up a comparatively tiny portion of the market. And speed is not a major failure point for most devices supporting USB 3.1 Gen 1. It’s not as if users with blue-plug hard drives are complaining about how slow they are: few devices can even fully saturate the 10 Gbps of USB 3.1 Gen 2, let alone the 20 Gbps of Thunderbolt 3.

When users do purchase a host device with USB–C ports, they’re likely to buy a conversion dongle to continue using the USB Type A cables and connectors they’re familiar with. Simple direct conversion dongles for USB–C to USB A are also reliable and cheap, so it’s a good choice for most users. Thanks to the relatively slow uptake of USB–C among consumers, there isn’t as much competition in the market for hubs and cables.

Because relatively fewer hubs are being made, manufacturers don’t get as much practice to iron out the defects in their design and production processes. That means the hubs are more likely to be unreliable or not fully up to spec in ways that are both frustrating and limiting. While your host device will likely “see” the USB ports and recognize devices connected to them, the connection might be buggy or slower than necessary.

Just multiplying USB–C ports is actually the easiest way to make USB–C hubs. USB-C doesn’t make that as easy as USB 2.0 did, unfortunately. So fabricators are still trying to figure it out, and they’re not perfect yet.

But just transferring data or power is comparitively easy. USB–C’s “alternate modes” can take graphic or network input, and those ports are even more likely to be buggy. That’s one of the reasons that USB breakout hubs are so expensive: they’re harder to design and build. Since data type is no longer segregated by connector type, USB–C hubs must include some chipsets to sort out inputs. And all that’s not necessarily a straightforward process. The majority of factories in China, where nearly all hubs are built, are great at cheap, straightforward processes; other things need practice and expertise.

It’s not just hubs; cables aren’t even safe. Stories about out-of-spec USB–C cables frying laptops are not unheard of. As OEMs gain experience, this will become less of an issue. But for now, it’s a real concern.

As time goes on, all these problems will lessen and eventually disappear. As fabricators get better at building USB 3.1 Gen 2-compliant hardware, we’ll see a commensurate improvement in the quality of hubs available. Until then, reviews are your friend. Look for devices made by reliable manufacturers with positive reviews from real users.

USB-C is the Future, Just Not How Apple is Implementing It