You are here: Home / Mac / The Weirdest iPhone Apps Ever 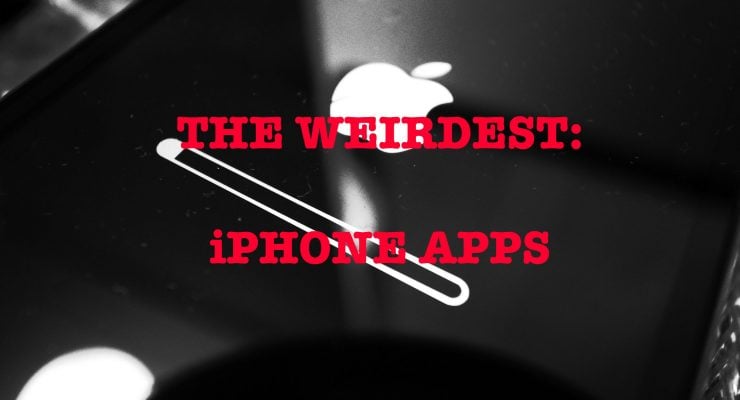 Ninety-nine percent of iPhone apps are pretty straightforward. You have to run without falling off a cliff or you swipe right to meet a boy/girl for a drink or you order your food ahead of time. However, there are a few odd ones and in the spirit of Halloween, we’re celebrating the unusual and weirdest iPhone apps. No, these apps are not “haunted”. They don’t allow you to talk to your dead relatives. More often than not, they’re unnecessary, ridiculous and in some instances just plain silly. Homeless Life Simulator is a game, technically. Or at least sort of. Apparently the goal of the game is to be successful, however you define success. You’re a homeless man and it’s not really a game where you walk around. You’re sort of just challenging yourself to make it out alive. Because, why not? Pooductive is an app that’s designed for people who get bored while they’re defecating. Apparently, all that you do is open the app when you’re on the toilet and it matches you with somebody else who is on a toilet somewhere. You can choose between local poopers or global poopers. The app also lets you play games and chat. iFart has become semi-famous in flatulence circles. They even have a Wikipedia page. The app is a red button set on a brown screen and when you press the button it makes fart sounds. The App Store reviews are all incredibly positive.

iFart costs a few dollars but I guess you can’t really put a price on a really great app. It doesn’t smell yet but maybe that update isn’t far off. I Am Rich was an app that cost almost a thousand dollars and literally didn’t do anything but flash the words “I am Rich” across your iPhone screen. It was quickly removed from the App store but not before eight people bought it. One customer bought it on purpose because they thought it was a joke and curiosity killed the wallet. SurgeProtector is the most necessary app on this list and I downloaded it immediately after reading about it. The app links up to Uber and figures out where the prices of cars are surging. Then it directs you to walk to the nearest place that you can go where the prices won’t be so high. It seems like the algorithm wouldn’t be that great but the app has high reviews on the App store. There are a lot of apps like Drunk Text Savior and I looked through settling on this one as the best of it’s own little odd category. The app watches your spelling after you’ve had a few too many. It also gives you a notification when you go to send that text to the girl/boy who you shouldn’t be texting after a three-hour game of bar trivia. Hold On is an app that I’m not sure how to classify. Is it a game? Sort of. Is it a productivity app? Not really. The entire premise of the game is to press a button. If you hold the button for a long time then good for you. It has a multiplayer mode so you can compete with your friends and see who spent the most time with their finger on their phone. It’s one dollar so if you found a few quarters on the sidewalk today, why not? K-Blocker is finally an app that I can get behind and the first one on this list that I actually downloaded. The app blocks any news about the Kardashians from showing up when you’re browsing the internet. If you’re beyond exhausted of hearing about the Kardashian gang (including Caytlin) then this is the app for you. It costs a dollar but for some of us, it’s worth a whole lot more.

Well there they are, the weirdest iPhone apps that I could find on the web. While a few of them are completely useless, some of them do have a nice purpose and I wouldn’t mind meeting a new friend when I’m on the toilet with Pooductive.