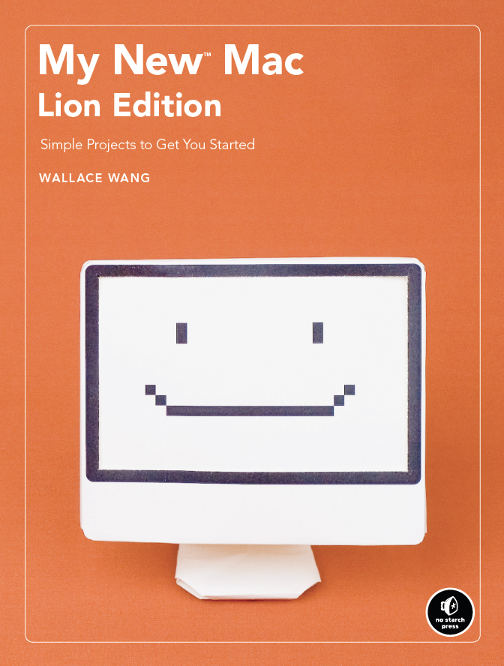 Apple believes that Mac OS X Lion is the easiest-to-use version of Mac OS ever, so they opted not to create a user manual. Having brought OS X more in line with the intuitive user interface of iOS on the iPad, the theory was that users would already know what to do with Lion, and have no need of instructions. But this very idea is an advanced one, and it’s not a one-size-fits-all solution.

Best suited for those who know nothing about computers, or at the very least are recent converts from Windows, Wallace Wang’s My New Mac, Lion Edition is the missing manual that Lion users are looking for. Its 472 pages contain everything you want to know about how to use your iMac or MacBook, in everyday language.

Structured a lot like a …For Dummies book, My New Mac is laid out in a branching tree structure, with loads of chapters and sub-headings, each one tackling a different aspect of how Lion works. Users who have never before done things like connect a computer to the Internet, download & install apps, burn a CD, or import digital pictures from a camera, will finally understand these how these cryptic things work.

Unlike traditional manuals, Mr. Wang helps you learn by suggesting projects for you to complete. Instead of explaining every single thing you can do with your Mac, the book zeroes-in on 56 specific tasks that the majority of users want to do, and teaches you how to do it. Also unlike the typical user manual, Wang isn’t afraid to show off his sense of humor (in addition to being a writer, he’s also a standup comic). For example, Chapter 19 is titled, “Giving Your Macintosh Multiple Personalities with User Accounts.” Now there’s a title Steve Jobs would never have approved.

This is the third edition of My New Mac, and as such it provides lots of instructions regarding Lion’s new features, like Mission Control, Launchpad, and the Mac App Store. You’ll also find step-by-step instructions for the overhauled versions of Mail, iPhoto, iMovie, and more. Experienced users won’t find a lot of advanced tips or techniques, but My New Mac isn’t really aimed at them. Wang’s book is plainly written, covering all of the basics that Apple newcomers need to know, and it gets my recommendation.