You are here: Home / Mac / Pro Terminal Commands: Working with chflags in macOS 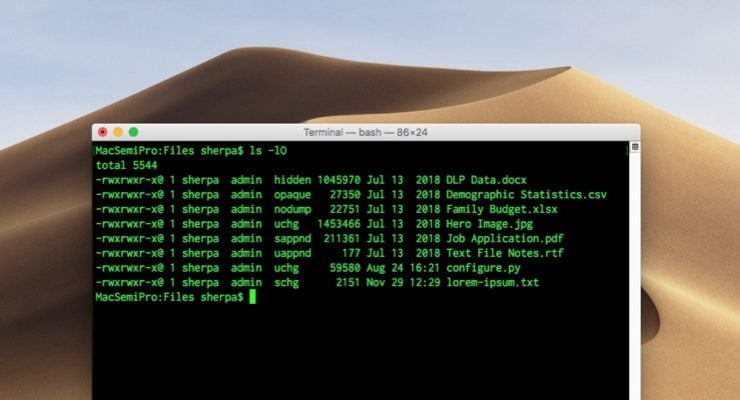 Flags are a system outside of permissions on macOS that are used to control how files can be changed. They are primarily concerned with controlled the modification of a file, but differently from permissions. Flags can only be set by an administrative user or the owner of the file, except in cases of system flags. Setting flags is often a useful way to temporarily restrict access to a file. They’re set differently from permissions but run in parallel.

The Terminal command chflags changes flags. The ls command, with the -lO flag, is used to view the currently-set flags. Either command can be run on the current directory, or on a specific file location. Let’s check out some examples of how chflags works on macOS.

In Terminal, you can use an ls flag to view any extant flags.

If there are no flags set for a file or folder, a dash will be shown instead.

Set flags can be removed by using their inverse, as described below.

Setting and Clearing Flags on macOS

Flags most frequently come up as a problem. Because they set extra-permission permissions, they can be easy to miss. Do you find yourself with a file that cannot be erased, regardless of how elevated your user permissions are? You might need to clear one or two flags.

Flags can also be set improperly or accidentally. They can also be shown if a file’s metadata has become corrupted or mishandled. If you are having trouble editing a file and you notice some strange flags, try removing them. You may find this will suddenly clear up your file problems. When setting a flag on macOS, use the command below. The recursive flag -R is available for directory-level operations:

will set the appropriate flag. For example, the following sets the nodump flag:

Only one flag can be set or removed per chflags command.

To clear a given flag, set its opposite. In most cases, this means prepending “no” to your command. In the case of nodump, set the dump flag to clear, like so:

As with chmod, a recursive flag is available:

Once flags have been cleared, you’ll be free to change the ownership and permissions of the file as expected.

Flags are most useful when limiting who can change a file. By locking files, you can prevent tampering or accidental edits at a file system level. Without escalation to root or the file owner, these privileges cannot be changed, so they’re moderately secure.