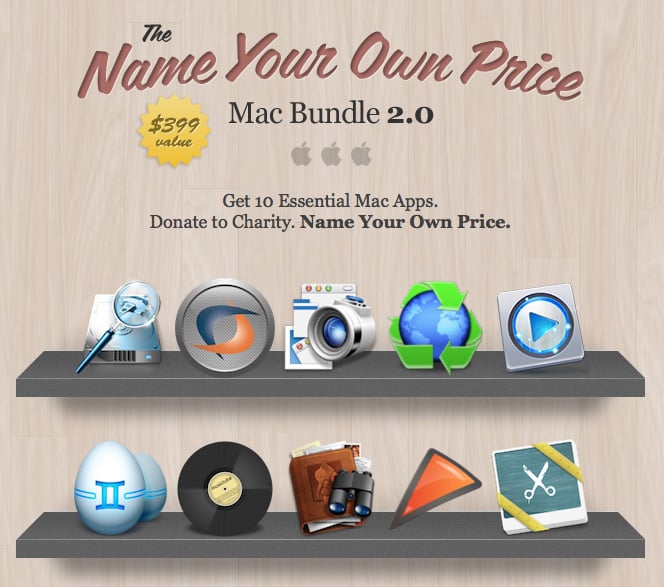 I love these Mac bundle deals where you get a truckload of great apps for a tiny fraction of their standard prices. Here are two you absolutely cannot afford to miss — and you need to act fast. The first bundle (and the one that expires soonest) is from the awesome people at MacHeist. I’ve written about MacHeist before; they do quality work and always manage to attract an incredible group of developers to contribute to their bundles. They’ve come through once again with eight great apps that would normally total $260, but which you can snag now for $9.99. The apps in this bundle include:

I can’t help noticing on the MacHeist front page that there are two empty slots that look like windows. Past ‘Heisters will recognize this as a hint that two more apps are going to be added to this bundle that have yet to be revealed. (If you look closely at those windows, you can already see the shadows of the app icons that will go there.) MacHeist will unveil them probably one at a time in the days leading up to the deadline.

Speaking of which, you have until April 23rd to take advantage of this MacHeist bundle. MacHeist has been known in the past to extend their offers with an extra day or two, but I wouldn’t count on it every time. The second bundle comes from 9to5Toys.com, and it works a little differently. Then 10 apps available in this bundle are being sold as a name-your-own-price deal — with a catch. You can literally pay a penny if you like, but you’ll only get three apps. To get all 10, you have to pay at least one penny more than the average price that other shoppers are paying. This means that the more people that buy the 9to5 bundle, the higher that average goes. At the time of this writing, it’s a little over $8, which is still a phenomenal deal for apps that are worth a cumulative $400.

They’re also running a contest where if you pay more than anyone else has so far, you’re entered into a contest to win a MacBook Air. There’s a leaderboard on the promotion’s page that shows what the current highest bidder has paid. At the moment, it’s hovering around $100.

The apps in 9to5’s bundle are some of the best apps on the market, including several that make it worth the purchase all by themselves.

You have until April 25th to take advantage of the 9to5 bundle. I grabbed this one myself, because the inclusion of CrossOver and Mac Blu-ray Player made it an absolute steal for the $8 I spent. Act fast, and you won’t have to spend much either.

Oh, and in both cases, 10% of your purchase price is donated to some very worthy charities.