You are here: Home / AppleTV / What to Expect from Apple’s Thursday Event 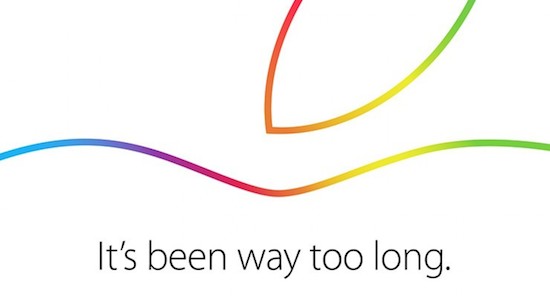 By now, I’m sure everyone knows that Apple is holding yet another event this Thursday, October 16. Invites were sent out to the media last week with a cryptic tagline of “It’s been way too long” emblazoned across the top.

Considering it has only been a little over a month since the iPhone 6 was introduced at a similar event, the invite can’t be referencing the length of time it has been since we last saw Tim Cook take the stage. So just what can we expect at Apple’s Thursday event? New iPads, new iMacs, and probably a healthy dose of disappointment.

Traditionally, Apple’s October events have always revolved around the iPad, and this year is likely to be no different. We can expect to see the new iPad Air 2 for the very first time, but judging from the rumors and leaks surrounding the product, it seems to be far more evolutionary than revolutionary.

The new iPad is expected to be slightly thinner than last year’s model, and come equipped with Touch ID for the first time. There are some indications that it will be powered by a new A8X chip, which would be faster, and more powerful than the A8 processor found in the iPhone 6. This has led some analysts to believe that Apple will ship the new tablet with 2GB of memory as well, which would certainly boost speed and overall performance.

All of those specs are exactly what you’d expect from the next generation iPad, but there really isn’t much there to get too excited about either. If you’re in the market for a new iPad, than this will be a great device for sure.

On the other hand, if you already own an Apple tablet, and it continues to perform well, there isn’t much here that will entice you to upgrade. Gamers will surely appreciate the faster processor and more memory, but otherwise this appears to be an incremental update to the tablet line.

Apple could surprise everyone by announcing split-screen multitasking however, and that would certainly be a compelling reason to potentially upgrade to a new iPad Air. There were rumors that such a features was coming to iOS8 while the operating system was in beta, but it has not appeared in any of the developer releases for months now, nor has it been spotted in iOS 8.1 either.  An upgraded A8X chip, coupled with 2GB of memory, should be more than capable of handling multitasking of this nature, so it would be up to Apple to deliver the feature in a compelling way. Perhaps we’ll see it in action for the first time on Thursday, but I wouldn’t hold your breath. The other product in Apple’s line-up that is expected to get a much-needed upgrade is the iMac. Rumors suggest that Apple’s all-in-one will make the leap to 4K – or even higher – displays. This would put the iMac’s screens squarely into the “retina” category, and would require some hefty specs under the hood to power the new monitors as well. Rumors indicate that the 27″ model will have an option for a 5K display, with a resolution of 5120 x 2880 pixels, making it an incredibly compelling product for graphics professionals, filmmakers, and photographers alike.

Making the jump to a 4K, or better, screens seems like a logical move for Apple, and one that some would say is long overdue. So what could possibly be disappointing about such a move? For starters, the price. A new 27″ iMac sporting a retina display isn’t likely to come cheap.

This first model will probably be introduced at a price-point that puts it out of reach for most of us, leaving us to look on with envy while we try to wait for them to become more affordable. On top of that, the first iMac with such a display could suffer from performance issues similar to those that plagued the first generation MacBook Pros with retina displays too. It took until the second generation for Apple to truly get it right. Everyone knows that we’re nearing the release of OS X Yosemite, so we’re likely to see more demonstrations of the new Mac operation system on Thursday, as well as learn its official release date. It would be great if Apple surprised everyone and released it that very day, but rumors seem to indicate it will come next week instead.

Either way, we’re just a few days away from Yosemite’s arrival. Lets just hope Apple has learned a few things from the initial iOS 8 release last month, as well as its subsequent update, and delivers a good, clean upgrade process for Mac users.

Speaking of iOS, the next version of the operating system for the iPhone and iPad will drop soon as well, bringing a host of bug fixes and enhancements along with it. It will likely release alongside the new iPad Air, and activate Apple Pay in the process. Expect to hear more about this software update as well, with potentially more information about Apple Pay too. iOS 8.1 is slated for an October release, but exactly when remains a mystery. Perhaps Apple will enlighten us on Thursday. While it seems certain that the iPad Air and iMac will see updates this Thursday, it isn’t clear if there will be any other products introduced at the event. The iPad Mini would normally be in line for an update as well, possibly getting the new A8X processor too. But there have been very few rumors or leaks about Apple’s smaller tablet, which is unusual this close to an event. It is possible that the device won’t see an upgrade at all, but could get a new, lower price point instead. This would make the Mini more competitive with some of the smaller Android tablets that it competes directly with.

If there are two products in Apple’s line-up that are long overdue for an update however, it is the AppleTV and the Mac Mini, the latter of which seems all-but forgotten in recent years. Both would fall under the “it’s been way too long” since we last got an update category for sure.

Considering Apple’s plans to make the AppleTV the center of it’s HomeKit system, a new version powered by an A8 processor – that could also run apps and play games – seems like a dream come true. And any update to the Mac Mini would be seen as a positive thing at this point, as it has mostly languished in obscurity since its last refresh in October of 2012.

I would certainly be surprised if Apple addressed all of these products on Thursday, as that would be an ambitious rollout indeed. You can bank on the new iPad Air and iMac, but anything beyond that is a crapshoot at this point.

Considering how successful last month’s iPhone 6 event was, it feels like Thursday’s event can’t help but be a major let down. After all, not only did we get two larger, and completely redesigned iPhones , we also had an introduction to Apple Pay and the Apple Watch too. That has set the bar high for this week’s follow-up event, but if you set your expectations accordingly, it will be possible to manage the levels of disappointment that are likely to follow.

How ApplePay Will Work, and How It Will Change Your Life