You are here: Home / Mac / Check Out All the Differences in Microsoft Office for Mac 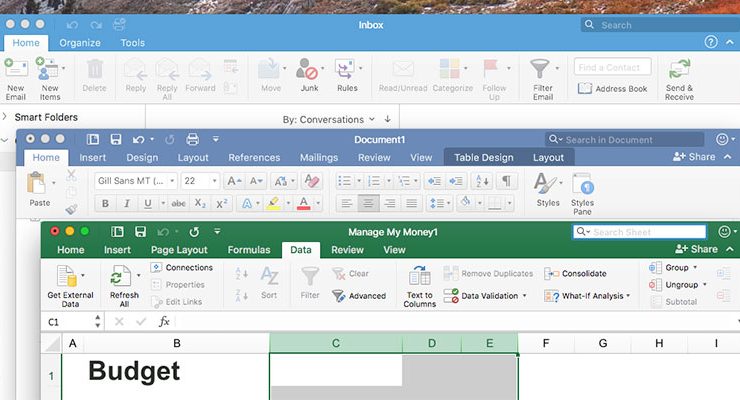 There are a number of office applications that you simply won’t find on the macOS version of Microsoft Office.

Microsoft Publisher: This desktop publishing app aimed at beginners isn’t a major loss for Mac users. There’s plenty of other apps that can do the job, from something as simple as Pages to something more complex like InDesign. And there’s plenty in between: one thing the Mac doesn’t lack is creativity software.

Microsoft Access: this database management tool is a much more useful application. It’s often used to take the place of unwieldy Excel databases. While it’s not the best version of the software available, it does come with Office, making it an attractive addition to the normal productivity suite. Unfortunately, Mac users won’t have access to this application.

Differences in Microsoft Office for Mac

Here’s a list of the major features you won’t find in Microsoft Office for Mac. It’s not guaranteed to cover everything, but it should hit in the highlights.

There’s some stuff missing from all parts of the Microsoft Office for Mac suite.

Visual Basic: This proprietary programming language is available on the Mac. However, some functions are missing, and the implementation is not as fully-featured as the Windows version. Code that works in Windows might not work in macOS. And it’s generally harder to write and execute.

SharePoint Support: SharePoint is used for sharing files and distributing data in corporate environments. Office for Mac does include support for SharePoint, but some features are missing.

Accessibility Checker: checks your document for formatting or content that might make it difficult to read for users with disabilities. If you have government-mandated reporting styles, or your organization cares about accessibility, this can be a great help.

Office Roaming: Windows users can connect to a streaming copy of Office on a PC for temporary use.

ActiveX: you might be most familiar with these macro-style document plugins as security risks. They also allow for significant programming within the Office environment.

Embed Fonts: When sharing documents on Word for Windows, you can embed custom fonts to display with your document. macOS users instead must save out PDFs, which don’t allow users to easily edit them.

Booklet Printing: Printing for booklet binding is not available in Office for Mac.

Built-in Screenshots: Word for Windows includes a built-in screenshot tool, which can automatically take screenshots and insert them in to your document. macOS has a pretty powerful screenshot tool that can help make up the difference, however.

Smart Lookup: This tool search through Bing for the selected text. Useful for quickly defining a term or acronym you’re not familiar with, but hardly essential.

Digital Ink: this digital drawing and annotation tool won’t be found on the Mac version of Word.

PivotCharts: these charts work with PivotTables, visualizing information created by your new layouts to reveal patterns. While some of this functionality can be captured manually, the automated features of PivotCharts won’t be available.

PowerPivot: this ultra-powerful add-in version of PivotTables isn’t available on the Mac.

Built-in Database Connectivity: Mac Excel cannot sync with data from external databases. Some data can be imported from external sources, but updated sync is not possible.

Customized shortcuts: You can’t assign your own keyboard shortcuts in Excel for Mac. All the modifiers are different too, so your muscle memory is probably shot.

Outlook users might have a problem that’s more annoying that missing features. The email and calendar app is not super compatible with iCloud calendar, especially not when it comes to the iPhone and Windows machines. So if you’re a big iCloud user, you might look elsewhere.

Google Security: Outlook for Mac is not as secure as its Window’s counterpart when it comes to Gmail addresses. You’ll need to explicitly permit less secure apps to get Outlook to interface with your Gmail address. This is not so for the Windows version.

Email editing and exporting: tables in email and composing emails in Word are both excluded. “Save As…” for emails is also not present.

Exchange: In general Exchange is supported, but certain features like managing distribution lists or supporting all Exchange Server versions are not.

Voting Buttons: not available in the Mac version

Social Connector: likewise, not available in any Mac version of Outlook

These missing features will almost certainly not be added to Office for Mac in the future. If you absolutely require the missing features, you can install Parallels to run the more complete version of Office or install Boot Camp on your Mac. Just keep in mind that single-license users can only install the suite on one machine. Multi-license users could install Office on both Windows and macOS. But pure cross-compatibility seems to be out of the question for now.

Microsoft, Apple and Burying the Hatchet