You are here: Home / Mac / Choose the Best External SSD for iMac 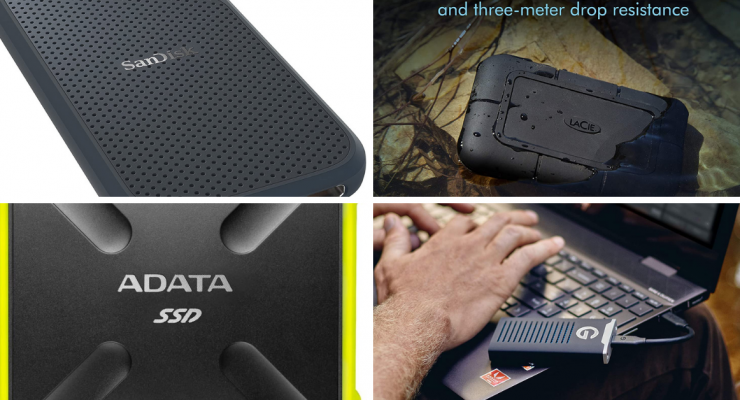 Back in the day, solid-state drives or SSDs were extremely expensive. Because of this, not a lot of people could afford to get one. Fortunately, the prices have gone down in recent years and you can now purchase one without breaking the bank.

Compared to the traditional hard drives that you’ve been using for so long, SSDs are definitely faster and sturdier. This is why most people prefer using SSDs over conventional hard drives. Some SSDs are even small enough to fit into your pocket. They are also portable, which makes them the perfect companion for your MacBook.

Yes, SSDs can be used not just for your iMac but for your MacBook as well. If you’re on the lookout for the best ones in the market today, take a look at these top picks.

Prior to the release of the SanDisk Extreme V2, the V1 model was among the top SSDs in the market. This newer version comes in better shape in terms of performance. It still sports the same physical design – compact and lightweight – but one should also look beyond aesthetics. The V2 model is shock-, dust-, and water-resistant with a rating of IP55. This newer model is also twice as fast as its predecessor, with a read speed of 908MB/s and a write speed of 938MB/s. The smallest storage is 500GB and the largest is 4TB.

Another contender for the best SSD in this list is the Western Digital My Passport. This latest model of WD ranges from 1TB to 4TB. Among its many outstanding features include cloud storage and 256-bit AES encryption. The brand also offers its own backup software that you can use if needed. Its data transfer speeds are also top-notch while its storage capacity is amazing given the price.

Aside from speed and storage capacity, data protection is also an important factor when choosing the best SSD. Similar to WD My Passport, the Buffalo MiniStation Extreme NFC also features 256-bit AES encryption, which ensures that your files are secured and protected. In addition, this SSD is designed to withstand drops and falls, so durability won’t be an issue. Aside from physical and data protection, you can also unlock this SSD using an NFC card, which is just nifty.

The main market of the Seagate Barracuda Fast SSD is gamers. However, the features of this SSD make it a great option for virtually anyone looking for a good backup drive. Weighing just 140g, this SSD is compact and portable. It also has a nice aesthetic design with a green stripe located at the top panel that lights up when the drive is in use. You can choose from 500GB, 1TB, and 2TB of storage space.

Another portable SSD worth checking out is the Samsung Portable SSD T5. It offers a data transfer speed of up to 550MB/s, which is making the most use out of its USB 3.1. However, do note that this SSD doesn’t come with a lot of storage space compared to the others on this list. Hence, it might not be the best option as a backup device if you need tons of memory space. Still, one can’t deny that this SSD performs faster than conventional hard drives.

If you’re not familiar with the brand G-Technology yet, then you’re definitely missing out. It’s among the makers of the best portable SSDs in the market today. In addition, its SSDs are also one of the most Mac-centric models around. The G-Technology G-Drive Mobile SSD is a handy SSD whose shape looks a bit close to SanDisk’s. It’s a bit bulkier but makes up for it in terms of durability. Aside from its speed and storage capacity, this SSD is also IP67 water-resistant.

The LaCie Rugged SSD Pro is the smallest SSD in its range. Don’t be fooled by its tiny size, as this SSD is packed with features. For one, it’s rated IP67 water-resistant so you won’t have to worry about any spills and splashes. It’s pocketable but it can also withstand a drop from 3 meters height. Apart from quick data transfers, this SSD also comes with a five-year warranty. Plus, in case you lose some important data from this SSD, you can visit one of their data-recovery labs to retrieve your lost data.

Another SSD worth looking into from Lacie is its Mobile SSD. It offers a USB-C interface but also comes with USB-A and USB-C adaptor cables so you won’t have any issue with the connectors. Weighing at just 100g, this SSD is certainly lightweight and the perfect MacBook buddy. It features a read speed of 225 MB/s and a write speed of 445MB/s, so there won’t be any lag issues during data transfer.

If you’re a bit on a tight budget, the Adata SD700 External SSD is an option that won’t make your wallet cry. Unlike most SSDs available right now, this one is one step higher in terms of water resistance; it’s rated IP68 water- and dust-resistant. Of course, it’s also a lot faster in comparison to the traditional spinning hard drives, but it won’t cost you as much as other SSDs. Plus, you get that rugged protection so durability is guaranteed.

Whether it’s for your Mac or MacBook, the Minix Neo Storage will be a great addition to your device. This SSD also serves as a USB hub as well as an HDMI port, so it basically has everything. It’s not even bulky, so you can take it with you if necessary. Imagine having all that data right inside your pocket, literally. It’s also made out of aluminum, so it looks aesthetically pleasing beside your Mac or MacBook.