You are here: Home / Lifestyle / Is This the World’s Biggest Apple Fan? 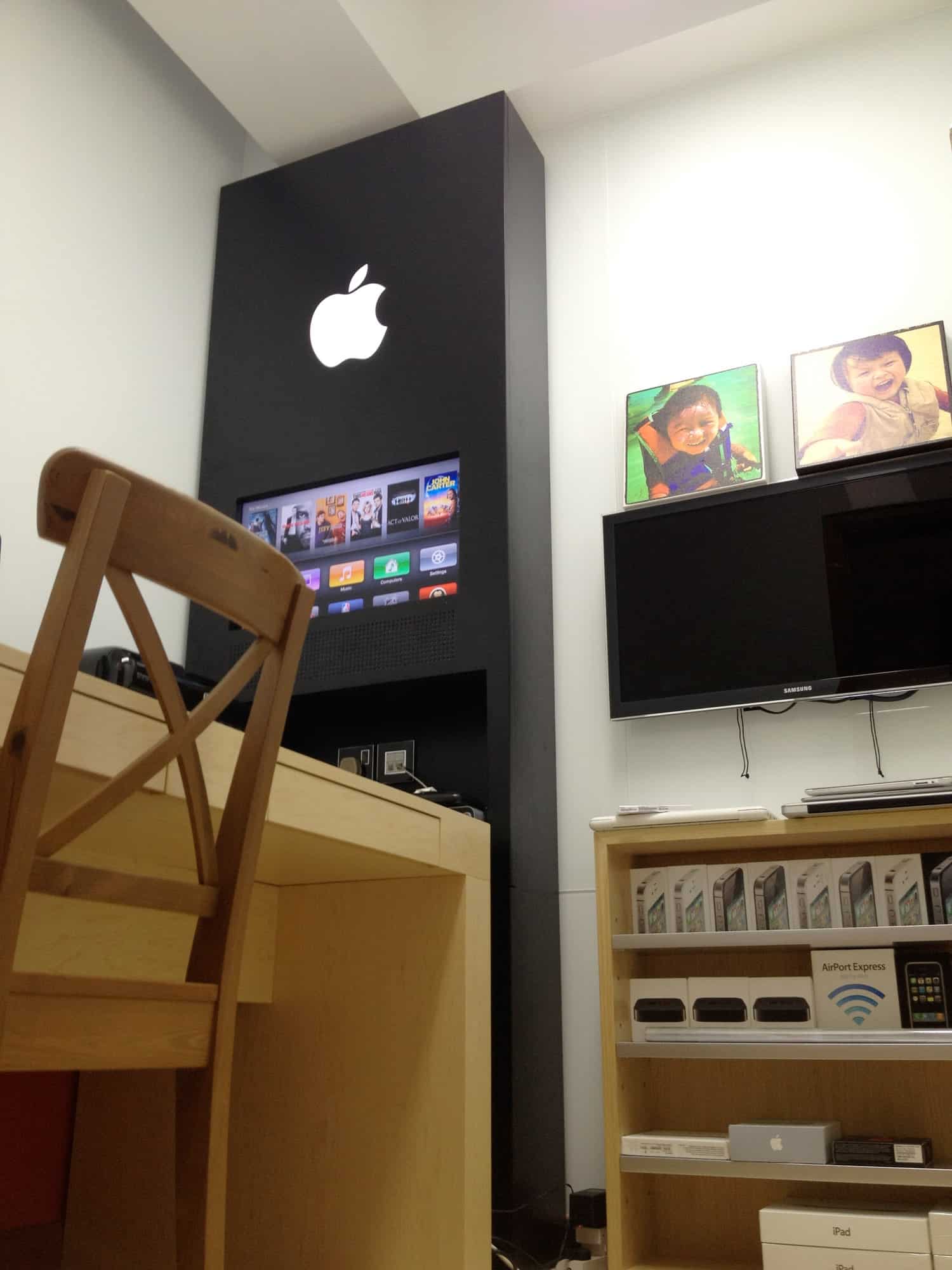 David Wu, an Apple fan working out of a 2m-by-2m office in Hong Kong, has taken his love of Apple to a new extreme. He’s turned his office into an Apple Store.

No other tech company in the world inspires the kind of cultish devotion that Apple does. Outsiders think we’re crazed obsessives who pray in the direction of Steve Jobs’ unmarked grave three times a day. That’s okay. Let them talk. Talking is all they’ve got. We’ve got better products.

David Wu’s obsession inspired him to create an office with an Apple Retail Store as his muse. He didn’t have much room to work with, but he made the most of it with this scaled-down, beautiful design that emphasizes simplicity. His desk was custom-made to look exactly like the wooden product tables in Apple Stores, only with drawers that work. He’s also got a wooden product cabinet stocked with his personal collection of Apple products, some of which go back several years.

But the pièce de résistance has to be the tall, black pillar that has a built-in LCD TV. The thing looks for all the world like a 2001 monolith that’s been Apple-branded, thanks to its backlit Apple logo. Wu says he has the TV hooked up to his Apple TV, and usually just lets it run through the built-in screensaver. Sort of a giant digital photo frame, I suppose.

There’s also a huge, rectangular light fixture that hangs over the office, which isn’t a replica of Apple Store lights, but has a suitably modern, clean feel to it. Here’s attention to detail for you: even the walls are Apple-fied. Three of them are clear glass with a white undercoat, while the wall behind his desk has a matte finish. Wu applied a bit of “Ferrari red” around the bottom of the walls to “add a little bit of life” to the otherwise nearly monochrome space.

Impressive stuff, but does it have authentic Italian Pietra Serena sandstone tiles?

The space is rounded out by a big-screen flatscreen, hung on the wall above the product cabinet. Wu uses this screen as a 24-hour news feed display. (He prefers CNN International and BBC World News, though he admits to sometimes watching Fox News for laughs.)

Wu jokes that all he needs to complete it is “a nice personable gentleman to don a blue Apple shirt and serve my every whim.” Head over to his blog to see lots more pictures of David Wu’s Apple-inspired office, along with details on how he made it.

Apple fans around the world will now hold our collectively breath, waiting with feverish anticipation for some zealous Microsoft fan to pick up the gauntlet and create a space inspired by their favorite tech company. Or maybe it will be an Android fan. Or a Google fan? Facebook? Samsung (he said, laughing hysterically)? Surely someone out there must be fan enough to recreate their favorite tech giant in their personal space.

Take a seat, everyone, and we’ll just wait right here for that to happen. Oh yeah, it’ll be any minute now.