You are here: Home / Lifestyle / Biggest Mac Geek Ever? 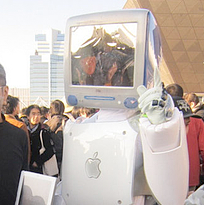 Best Apple cosplay of all time? You be the judge.

This astounding costume is made from parts of old Macs and iMacs. (You might recognize the guy standing next to him, too.) The photo, first posted by M.I.C. Gadget, was taken in Chongqing, China, but it’s unknown what the occasion was.

Were they waiting in line at one of those Apple stores? Is there a geeky convention of some kind taking place? Have all of those fake Apple products in China gotten so out of control that Chinese television is debuting a new superhero show starring MacMan?!

I can almost see that… The Steve Jobs stand-in would be sort of like Professor X, sending MacMan out to rescue frustrated PC users…