You are here: Home / iOS / What? Only HP Will Print from iPad? 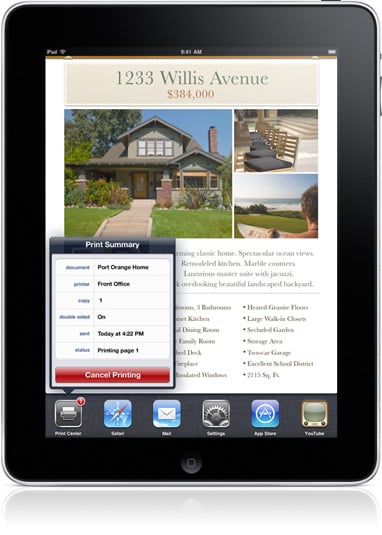 AirPrint is one of the major selling points of iOS 4.2, which is supposedly coming to iPhone, iPod Touch, and most importantly, is bringing iOS 4 capabilities to iPad, any day now. But now word is spreading that only a specific set of printers by HP will be able to use AirPrint. Like, at all.

The idea behind AirPrint is, as it sounds, to finally make a longtime wish of iOS users possible: printing. Steve Jobs introduced AirPrint at a recent keynote, where he claimed it would allow all of Apple’s mobile devices to easily print to any printer that’s shared over a network. That’s any printer, regardless of make, model, toner cartridges, paper, etc. No drivers, no software to install, no muss, no fuss.

Apparently either Steve was lying, or it was a lot harder to pull off than Apple expected it to be. Rumors are circulating that suggest that instability and compatibility issues have plagued AirPrint to the point that it’s currently impossible via shared network printers. So Steve is faced with a tough decision: should he allow iOS 4.2 to finally be released as is, without a fully functional AirPrint, or should he delay this long-awaited upgrade yet again — potentially angering iPad users who have been waiting for it the longest?

Right now, the only printers that work with AirPrint are HP’s “ePrint” series.