You are here: Home / Apps / Review: The World by National Geographic 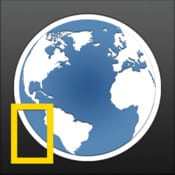 National Geographic’s The World app for iPad is an interactive globe onto which dozens of flat, paper maps can be overlaid for more detailed views. Like a real-world spinning globe, it’s designed as a cool way to learn about the Earth’s geography.

When you first fire up the app, you’ll be presented with a virtual globe that’s covered in yellow dots. Each dot represents one of NatGeo’s printed maps. Pinch-to-zoom in on the globe, or use one finger to rotate it in 360 degrees, and you’ll discover even more yellow dots. The globe starts as a terrain map, but you can switch it to a reference map or a detailed ocean map, showing the features of the ocean floor. Select a dot, and the globe zooms in on that region and overlays it with a square paper map that’s applied to the curved shape of the globe. As cool as this sounds — and it is a very cool effect — the maps all feel very dated. The maps show the standard country borders, city locations, railroad lines, airports, major highways, bodies of water, and some other minutia. This is all well and good, but when we’re used to being able to get on Google or Bing and zoom right down to the street level, and even get detailed directions from one place to another, these printed street maps feel downright ancient. Most of the maps’ resolutions do hold up down to the city level before becoming fuzzy. There’s also a built-in snapshot function which lets you capture an image of any part of the globe or map that you want, and then share it with a friend via Facebook, Twitter, or email. A “Maps” tab at the bottom of the screen takes you to a complete list of all of the regional maps it has available; you can sort these by continent or alphabetically. A “Nations” tab sends you to a list of the world’s nations, listed visually as their national flag. Select one, and you’ll be taken to a close-up of that country, along with a concise but detailed sidebar full of information. There are stats that consist of things like population numbers, government type, life expectancy, major religions, languages spoken, and more. There’s also a brief article that sums up the country’s history. The final tab at the bottom of the screen is “Photos,” which is loaded withÂ Â professional-quality pics, and NatGeo only chose the best of the best to include in their app. (You can also reach these photos via a sidebar tab in the “Nations” section.) The pictures are universally stunning, with incredible clarity, genius composition, and colors that pop right off the screen. I didn’t recognize a lot of the locations in the photos, which made learning about them all the more compelling. Every photo comes with a caption. Sadly, you can’t zoom in on any of them. But you do have the option to scroll through these hundreds of photos by swiping left or right. I could spend hours going through them all, because it makes for a fascinating means of discovering interesting places in the world. The World feels like somebody wanted to find a way to put all of National Geographic’s legacy maps of various parts of the globe onto the iPad in an interesting and interactive way. It might be a flawed concept from the outset — because the maps are old fashioned by today’s standards — but it’s still remarkably fun to play with. Ultimately, it succeeds if you use it as an interactive learning tool, because it’s just plain fun and fascinating to use.

Just because it’s not useful for the kinds of things we’ve come to expect from interactive maps (like street maps or detailed directions) doesn’t mean it’s not a worthwhile experience.