You are here: Home / iPhone / We Asked 1000 People What They Thought Of The Keynote & iPhone 7 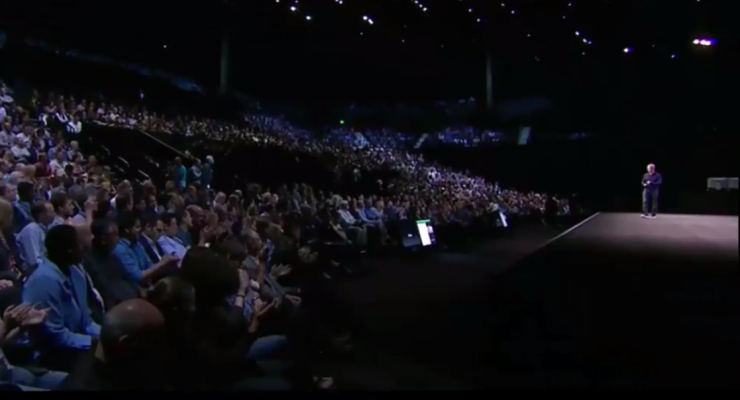 Last night we finally saw the iPhone 7 and iPhone 7 Plus and we asked over a thousand people what their iPhone 7 reactions were. The Keynote kicked off with a fun little lighthearted bit that featured Tim Cook, James Cordon and Pharrell driving around and some quips from Siri.

Super Mario is coming to the iPhone https://t.co/7nPR4GiRTv

Then the event got serious, Cook praised Apple Music and the App Store and announced that Super Mario is coming to the App Store! There was a new Apple Watch and we found out that Pokemon GO is coming to the Apple Watch. The new watch is waterproof and we learned a little bit more about iOS 10 which will be released on September the 13th so mark of some time for that download.

Introducing Apple Watch Series 2. Designed for all the ways you move. Learn more at https://t.co/4fNPs3ljsk pic.twitter.com/pHbo6Z3pUA

But the real story of the night was the iPhone 7. Asked over a thousand people what they thought of the new model and got their iPhone 7 reactions. The survey was conducted via Toluna’s AskTheNation Methodology that figures for age, sex, race/ethnicity, region and household income to bring them in line with their actual proportions in the population. People were expecting a lot from the iPhone 7 even before it was revealed. Even owners of other smartphones were anticipating the iPhone 7 to be a step up from the previous model and iPhone 6 users were especially hopeful. However when it came to the performance of the phone some users were skeptical. This might be because we didn’t see that much of an improvement with iOS 9 and despite the hype behind iOS 10, a few of us are still a bit jaded. That being said, the new apps that are unrolling for the iPhone 7 have me very excited. I still can’t get over Super Mario. People were happy about the new iPhone and current iPhone users were especially excited about it. They might not be lining up in front of the stores like they did for the first iPhone but it’s safe to assume that the iPhone will remain the face of Apple. We heard throughout the keynote that this is the best iPhone ever made. The new double camera is a huge step up from anything that we’ve seen from the company before. With the iPhone 7, there’s definitely going to be a new standard for mobile phone photography so it’s time to step up your Instagram. Current iPhone 6 owners loved the new device (or maybe we just love all new iPhones) and over 40% said that they’ll be purchasing the new iPhone. There’s even a strong interest from people who currently own other smartphones. And for Apple, that’s great news. The lack of a headphone jack didn’t seem to scare off as many customers as we might have expected and you can guarantee that it’s going to drive up Apple’s headphones sales since wireless headphones are a lot easier to lose. In fact, Apple might have created an entirely new market for themselves by switching to wireless. Despite reservations that they might have had, most iPhone users and smartphone owners were excited about the announcement of the iPhone and the new features. The new phone HOME app, which lets you monitor your devices in your house (everything from lightbulbs and air-conditioning to your television) is going to be a huge selling point. Like the self-driving car, it’s going to take a long time to make everything “smart”.

The iPhone 7 reactions were a lot more positive that you might have expected. We could get really technical but basically what Apple needed to do last night was show us a model that wasn’t “just another iPhone”. And with the new series of apps, the new camera and the upgraded Siri, they definitely did that.

You List Of The Best iPhone 7 Cases Already Available

Here Are The Best Places To Sell An iPhone Online