You are here: Home / iPhone / How Worried Should You Be About Your iPhone 7 Exploding? 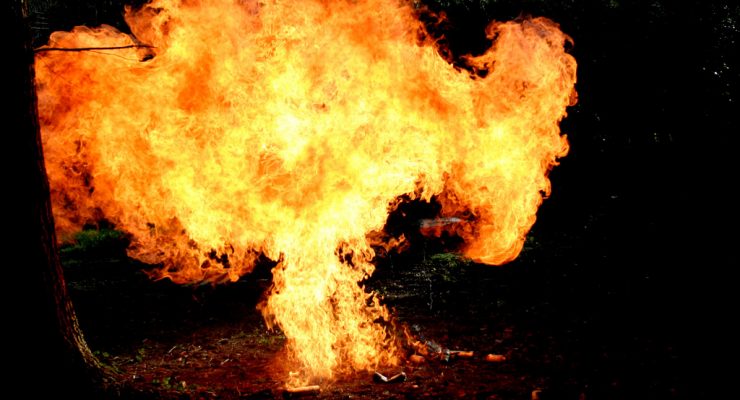 Samsung’s Galaxy has had a rough time in recent weeks with numerous reports of the phone exploding in people’s pockets and a few Apple users are now worried about their iPhone 7 exploding. The Galaxy has exploded so frequently that it’s now banned from most airlines. The internet is ripe with images of exploding Galaxy Note 7s. ABC recently did a segment on the exploding phone:

But with all the hype around the exploding phone, the question remains to us, “how worried should we be?” I’ve scoured the internet pretty thoroughly and only been able to find one instance of an iPhone 7 exploding. The Reddit feed dedicated to Apple features an image of an iPhone 7 postmortem.
The iPhone was apparently already exploded when it arrived. According to the Redditor, an Apple representative reached out to them in an attempt to get more information about the phone that didn’t live. In all likelyhood, the explosion is not the fault of Apple being careless as much as it is the fault of a apathetic baggage handler.

Something in me kind of likes the idea that my smartphone could suddenly explode or burst into flames. #jeopardy#Samsung

Before we start a witch hunt upon all smart phones, it’s best to figure out exactly what is happening. iPhones (as well as most other smartphones) are powered by Lithium batteries. These are relatively small batteries that we expect to generate a lot of power. About.com states that there are two reasons a lithium battery might explode. Firstly, there might be a short that could turn into a spark, which could turn into a fire. This happens because the Lithium ions are carried in a sort of liquid, when it gets too hot, a gas bubble forms, and a short occurs. The other way (and more common) reason that a battery and in turn, phone catches fire, is overheating. The phone might become too hot, something the chemists call “thermal runaway” and that could lead to a phone going up in flames. If too much heat is generated it might spark and lithium is highly reactive. Sort of your basic 9th grade science class experiment.

ME: my phone exploded
SAMSUNG: ok heres a new one
ME: ok cool will this one explode too
SAMSUNG: [sweating]
ME: guys

There are a few tips that might help keep your phone from being the next party trick.

Don’t keep your laptop, phone and tablet together. These all use lithium batteries and while there’s not any risk of them conspiring against you, there’s always a risk of fire. And when that fire catches, it’s better to limit your loss to one electronic.

The reason these devices are exploding (most of the time) is that they’re overheating. Badly. The obvious answer to this is to turn your phone off, at least during the heat of the moment. If you’re a beach bum, you’re not going to want to leave your phone out when you’re catching a few rays. The iPhone touch used to shut down when it became overheated. While I witnessed that feature several times in that device, I have yet to notice it happening in an iPhone.

Got an email from Delta today saying I can’t fly with a Samsung Note 7. I’m good. I already saw one Samsung explode this weekend…

How worried should we be?

Probably not terrified. While there is at least one case of an iPhone 7 exploding, it doesn’t seem to be a common occurrence. You’re much more likely to see Sasquatch or at least a UFO. Batteries aren’t as stable as they should be. That’s because we expect our smartphones to be razor-thin. The issue with the Galaxy Note (which they’ve since stopped manufacturing) seems to have been cleared up with the iPhone before it went into production. Which begs the question, is there a box in a lab somewhere with dozens of exploded iPhones?

Why I’m Not Buying The iPhone 7