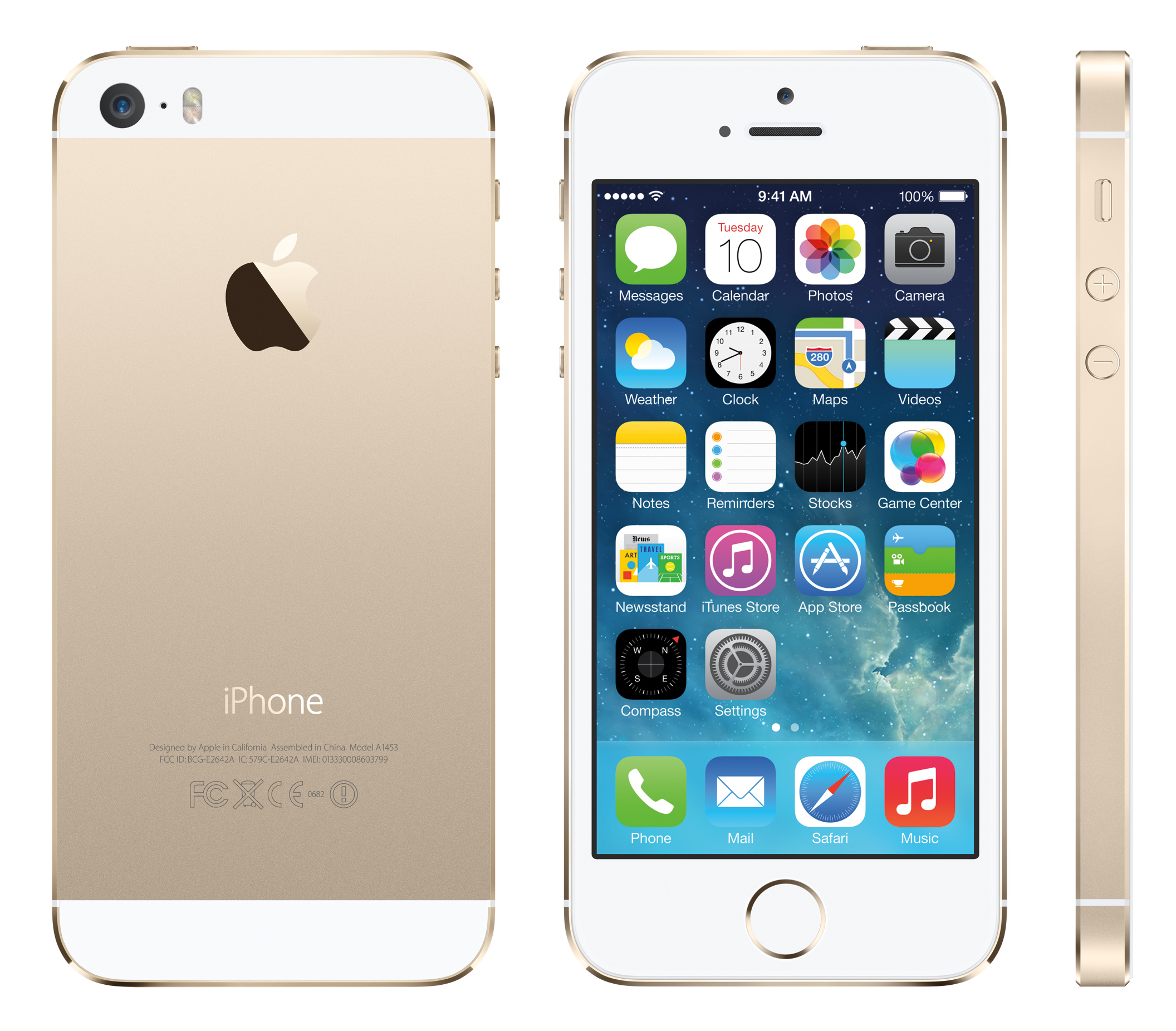 There were no surprises at Apple’s annual iPhone upgrade event, a fairly low-key affair where the iPhone 5S and iPhone 5C were unveiled. Here’s everything you need to know. As expected, Apple trotted out a new variation of the iPhone 5, which was touted as a “replacement” to the last generation. Instead of merely dropping the price of the iPhone 5, they’re discontinuing it altogether and replacing it with the more colorful and less expensive iPhone 5C.

The 5C has a hard-shell plastic housing that’s molded as a single piece with no seams or joints. The phone has a steel-reinforced frame underneath the shell, to ensure it doesn’t have a “cheap plastic” feel. The frame also acts as an antenna. It comes in five “fun” colors, and has all of the same innards as the iPhone 5 — with a few tweaks. Chief among them: a new HD FaceTime camera on the front and a slightly larger battery inside, as well as more LTE band compatibility than any other smartphone. Does the “C” in the name stand for “color”? Perhaps, though no explanation was ever given. If the press photos Apple supplied are indicative of the 5C’s specs, then the front glass frame only comes in black., which is kind of surprising. A lot of people love their white iPhones (yours truly included). 5C owners will have to settle for a white back and sides. There are new rubber cases available in multiple colors that have been designed specifically for the 5C.

iPhone 5C will be available in White, Yellow, Pink, Green, and Blue, in 16GB or 32GB configurations. In a nice bit of hardware/software synchronicity, every 5C will come preset with wallpaper colors that match their plastic shell color. The 5C starts at an impressively low $99. Pre-orders begin this Friday, September 13th, for delivery and in-store availability one week later, on September 20th. The biggest news, of course, was the new iPhone 5S, Apple’s latest state-of-the-art smartphone. The recurring theme throughout the 5S presentation was “no packed-in feature after feature.” Which was Apple’s way of saying, “Suck it, Samsung.” Samsung, in its never-ending desperation to outdo Apple, has become known for throwing loads of gimmicky features into its Galaxy S series smartphones — a difference that Sir Jony Ive described as “rampant technology for technology’s sake.” Tim Cook & Co. painted a striking contrast with the iPhone 5S, a smartphone with meaningful new technologies that are there to make your life easier, your tasks simpler.

Touch ID is the 5S’s headline feature, the way that Siri was the key selling point of the 4S. And it’s a perfect example of what Ive was talking about. Touch ID is iPhone’s new built-in fingerprint scanner, a techno-marvel that’s designed to simplify personal security. Touch ID is meant to replace that tedious process of entering your 4-digit passcode over and over throughout the day just to unlock your phone. Now, you’ll be able to unlock your phone simply by touching the Home button (where the sensor is located). It’s sensitive enough to differentiate fingerprints by scanning sub-epidermal skin layers at 500ppi resolution. And it reads your print at any orientation, so whether you stick your finger on it upright or reach over from the phone’s side, it’ll still recognize you, quickly and efficiently.

You can use Touch ID for any function that currently requires password, such as making iTunes purchases. It’ll read multiple prints from several users, too, so it’s not restricted to one user. Oh, and I love this: the fingerprint sensor/Home button features a sapphire crystal surface, which means it’ll never scratch. (It’s exactly these kinds of thoughtful details that makes Apple special, in my opinion.) The iPhone 5S also represents a significant boost in power and speed. It’s the first smartphone ever made that’s built on 64-bit architecture, thanks to Apple’s new A7 processor, and iOS 7 was built with 64-bit computing in mind as well. So it’s blazingly fast — more than twice as fast as the iPhone 5.

5S also incorporates a brand new part that’s never been part of any smartphone before: a processor dedicated purely to monitoring and interpreting motion. It’s called M7, and it continually measures motion data, with its own accelerator, gyroscope, and compass. Apple was particularly keen on how this sophisticated new chip paves the way for a whole new generation of health and fitness apps. To that end, an M7 toolkit is being added to Xcode, so developers can access and incorporate its functions into their apps. Apple’s always had a strong relationship with Nike, and it looks like the shoemaker got early access to the M7 technology, as they already have a new app ready for the 5S called Nike+ Move.

The final new piece of the iPhone 5S puzzle is overhauled camera hardware. The new system has a 5-element lens capable of taking larger pictures than the iPhone 5 could, thanks to a larger aperture and more pixels. The 5S camera is not just bigger, it’s smarter, too. It automatically optimizes your photos’ white balance, exposure, etc. It boasts a dual LED flash, each flash having a different image temperature, which work together to find the right color balance. A new “burst mode” takes ten photo frames in a single second and then auto-combines their light levels to create a perfect balance, while picking the sharpest frame for you. All of this newfangled technology is particularly helpful at capturing more realistic and less washed-out skin tones.

The iPhone 5S camera can also shoot in slow-motion. It can film 720p HD video at up to 120 frames per second. And panorama mode will shoot at 28 megapixels, with the camera automatically adjusting exposure levels as you pan across. Nifty.

iPhone 5S will come in three high-grade aluminum colors: Silver, Gold, and “Space Gray.” (Space Gray is darker than Silver.) Curiously, Apple’s not taking pre-orders for the 5S, as they are for the 5C, but the high-end phone will also be available starting September 20th. The iPhone 5S starts at $199.

If you’re worried about getting a 5S on launch day… Well, you probably should be. Buyers started lining up at the 5th Avenue “glass cube” Apple Store in New York earlier today, right about the time Cook wrapped up the keynote. Here’s a look at the scene from just a few hours ago: Like the venerable iPad 2, Apple will continue to manufacture the good ol’ 8GB iPhone 4S, in addition to the two new models. It’s definitely the lowest-end model available, with its smaller screen and (slightly) outdated feature set. But Apple’s making up for this by offering the iPhone 4S for free.

True to form, Apple is releasing its new version of iOS a couple of days before the new iPhones arrive. No major new features were announced for iOS 7 that we didn’t already learn about at WWDC this Summer (aside from the 64-bit and M7 stuff mentioned above), but the one thing we did learn is a release date. iOS 7 will be available as a free download on September 18th.

Speculation at WWDC was that Apple would stagger iOS 7’s release, putting it out for iPad some time after the iPhone version. But it’s not so! iOS 7 will be available for all compatible devices on the same day — the 18th. As for those compatible devices, iOS 7 will only work on iPhone 4+, iPad 2+, iPad Mini, and 5th-gen iPod Touch.

You know how the main three iWork apps — Pages, Numbers, & Keynote — have been in “free beta” mode on iCloud for a few months now? Turns out that whole free thing wasn’t a fluke. Purchase any new iOS device, and you’ll get all three of these apps 100% free, along with iPhoto and iMovie. Probably sucks for users who’ve paid $10 each for the iWork apps in the past, but whadayagonnado?

During the iPhone 5S presentation, Donald Mustard of ChAIR Entertainment appeared to announce “the epic conclusion of the Infinity Blade trilogy,” Infinity Blade III. You’ll be able to play as one of two characters, and in a major upgrade, there are enormous open areas available to explore. The graphics looked typically jaw-dropping, too, taking full advantage of the 5S’s new horsepower.

ChAIR stopped short of giving it an exact release date, but noted that it will “be available in the App Store alongside the new iPhone 5S.” Which likely means a 9/20 release. But we’ll see.

What I liked:
Apple continues to set itself apart from the competition by showing just how thoughtful and intentional they are about all their decisions. Could they put in all of those gimmicky features that Samsung likes to cram in? Sure. But they choose not to, because they’re smart enough to recognize the value of a really cohesive hardware/OS/app infrastructure.

I also love that Apple’s come out swinging with their last two keynotes. They’ve gotten tons of criticism since Steve Jobs’ death, particularly from their competitors who like to pretend like Apple is standing still while they innovate out the wazoo. Apple’s proven lately by pressing forward and looking to the future that all that naysaying is nothing but empty talk.

What I didn’t like:
Anybody else miss the days when Apple would blow our minds with unexpected surprises? Internet leaks out of China and even Cupertino itself have made those kinds of thrilling shocks a thing of the past. We knew virtually every feature of both new iPhones weeks before today’s event. That makes me sad.

Jobs was a gifted futurist, a one-in-a-billion who had the uncommon ability to correctly predict the future and build products that were ready for it. Apple’s still in the business of making the future happen, but they’ve lost Jobs’ spark, that electrifying enthusiasm that dazzled us and build excitement for the latest and greatest gadgets. It’s been a long time since I’ve been left excited, heart racing after an Apple keynote, and today was no exception.

I’m excited for Apple’s new iPhones, don’t get me wrong, but without Jobs’ showmanship and love of whipping out surprise announcements that no one saw coming (and his ability to, you know, actually keep a secret), these keynotes are becoming awfully anticlimactic.