You are here: Home / Feature / Why Isn’t There a Killer Facebook App for iPad? 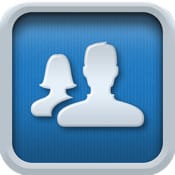 “Facebook + iPad” is a total no-brainer. They’re both content-consumption platforms, both user-friendly, both wildly popular. So why aren’t they willing to walk down the aisle hand-in-hand?

For its part, Facebook has repeatedly expressed a total lack of interest in creating a dedicated iPad app — even though they have one of the best iPhone apps available. Is there a logical disconnect there? You bet. Yet Facebook is resolute in its decision not to jump on the iPad bandwagon. Facebook’s current plan is said to be a dedicated “web app” made just for tablets to access, via web browsers. It’s supposedly an all-encompassing formula that will meet the needs of multiple tablets, not just the iPad alone.

Sounds great on paper, but we all know that surfing the web is not the ideal content consumption experience for the iPad. Apps run far smoother than webpages do, and apps can do all sorts of cool things that the Net can’t. Facebook is adequate within a tablet browser, but it runs slower and many of their most interactive features don’t work at all. You can’t scroll a window inside a window, for example, so reading comments on photos is all but impossible.

There are a lot of third-party Facebook apps for the iPad, but there’s no clear winner, no fan favorite. Twitter’s official iPad app is a knockout that does everything with style and ease, taking full advantage of touch input controls and the iPad’s large screen size.

So why hasn’t anybody come up with a Facebook app that fits the same bill?

Some have tried. And to be certain, there are some quality Facebook apps in the iTunes Store. (A popular one even tries to emulate the official Twitter app, and achieves the effect successfully.) Yet for whatever reason, no one has landed on that special formula that hits the Facebook sweet spot.

Here are a few of the best contenders for the throne (note that most of the paid ones have free “lite” versions available to try before you buy). None of them are exactly what you’re longing for, but maybe one will strike your fancy until that glorious day when Facebook and iPad finally enjoy wedded bliss.