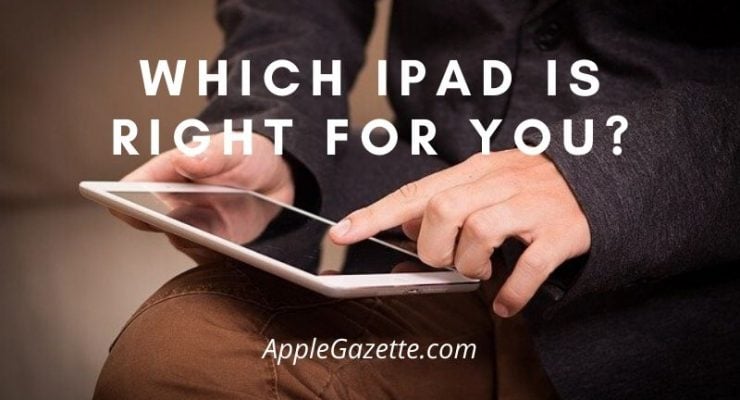 There are so many options to choose from when deciding which iPad to buy. Packed with different features, each iPad serves a different purpose depending on what you’re going to use it for. It can be quite confusing especially with the different generations on offer. Here are some of the best iPad models to get when you find yourself in an Apple Store – or anywhere online.

Which iPad is best for you?

Compact for People on the Go: iPad Mini 5

On the other hand, it also retained some of its predecessor’s features such as the bezels and Touch ID. Sporting a 7.9-inch screen, the iPad Mini 5 is equipped with an IPS LCD and True Tone. Its other features include 10-hour battery life and an 8-megapixel back camera. This model comes in three colors: silver, gold, and space gray.

Get an iPad Mini.

If the heavy weight is stopping you from getting the iPad Pro, a great and close alternative would be the iPad Air. Launched in 2019, the newest iPad Air model is best for people who want a lighter version of the iPad Pro. It comes with a 10.5-inch Retina display complemented by True Tone. Apple also updated this model with the latest A12 Bionic processor, ensuring a faster performance compared to its predecessor.

In addition, the newest generation of iPad Air supports Apple Pencil, great for people who wish to create illustrations using an iPad. You can choose between the 64GB and the 256GB edition. The iPad Air also supports Smart Keyboard for people who are more comfortable typing on an actual keyboard. The iPad Air is probably the best iPad for college students who want to find an alternative for a laptop.

Get an iPad Air. The biggest iPad in this list is definitely the iPad Pro. Redesigned and launched in 2018, the newest iPad Pro comes with thinner bezels. Its performance is unrivaled compared to the other iPad models. Instead of the old home button, this generation has replaced it with FaceID. The iPad Pro comes in two sizes: an 11-inch screen and a 12.9-inch screen.

Dubbed as the most powerful iPad in the market today, the iPad Pro can support heavy software for photo editing as well as online video games. Still, it cannot compare to the level of performance of desktops. Nonetheless, out of all the iPads on offer, the iPad Pro performs the best. Its resolution is also highest in the range, with a whopping 2732 x 2048 pixels for the 12.9-inch version.

Thanks to its refresh rate of 120Hz, the response of this device is fast and smooth. It also comes with the latest iOS processor to date: the A12X Bionic chip. Equipped with 4GB of RAM, its performance is incomparable to other iPads. If you choose the 1TB storage version, you’ll be holding an iPad Pro equipped with 6GB of RAM. The iPad Pro certainly works great for multitasking.

The only drawback to this amazing device is its steep price. However, if you have the budget for it, the iPad Pro is an incredible gadget that will boost your productivity especially if it’s coupled with the right accessories. This includes the Smart Keyboard, which allows you to type more comfortably. The iPad Pro also supports Apple Pencil and allows it to charge wirelessly.

With a 12-megapixel main camera, the Pro is also great for taking photos. This feature is coupled with a 7-megapixel TrueDepth camera. Suffice it to say, if you’re wondering which iPad should you buy or use, the iPad Pro is your best bet.

If you’re tight on the budget, it would probably be best to opt for the 10.2-inch iPad. Released in 2019, this model is the most affordable one in the iPad range. It’s an upgraded version of its 2018 predecessor. While it sports the same processor as before, the A10 Fusion chip, the iPad can still run most apps in the Apple store. Aside from an upgrade in screen size, this model also now supports Apple Pencil first-gen.

And that’s some of the best iPads currently on the market. Depending on what you’re into, whether it’s traveling, illustrating, or just working, there is an iPad that best fits your needs. So if you’re wondering which iPad should you buy or use, just look at the list above, choose the best one, and head straight to the Apple store near you.