You are here: Home / iPad / iPad Not Charging When Plugged Into Computer? 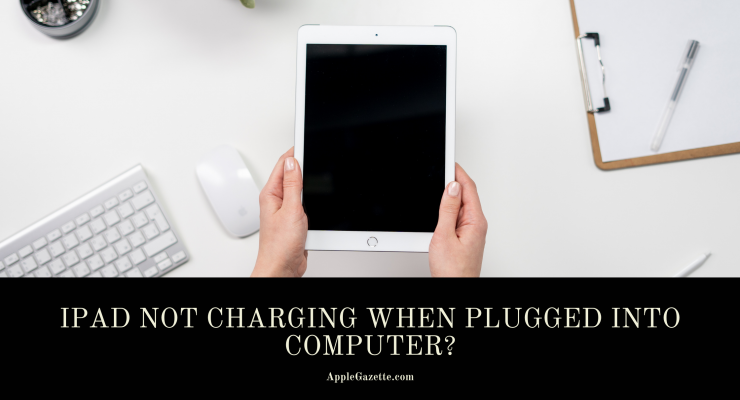 How to charge your iPad is basically the same as how you charge your iPhone. You can charge it through a power outlet or simply plug it into a computer. However, what if it suddenly won’t charge even though it’s already plugged?

Now, don’t panic and think that there’s something wrong with your iPad. There are other reasons why your iPad might not be charging when plugged into a computer. Here are some cases to consider as to why your iPad is not charging:

In some cases, your computer might be the problem. It’s not that your computer is broken, but it may not be able to discharge enough power to charge your iPad. This is quite common for older computers. After all, even though the charging method of an iPad is similar to an iPhone, an iPad requires considerably more power. So while there might not be a problem charging your iPhone, it may be slower to charge your iPad using the same computer.

Some indications that you can look out for is the warning “Not Charging.” This doesn’t mean that your iPad is not charging at all. It’s possible that your iPad is just not getting enough power from your computer to make the lightning bolt on your iPad appear. It can still be charging but at a much slower rate.

If you insist on charging your iPad using this computer, it would probably be best to not use the former while charging. This is just to make sure that your iPad won’t be using more power than it needs to. Better yet, plug it into a power outlet for faster charging.

Now, if you try to plug it into a power outlet and it still won’t charge or charges considerably slow, don’t panic and conclude that it must be your iPad’s fault now. You can also consider checking the power adapter. Remember that using an iPhone power adapter may result in slower charging compared to using an iPad power adapter. Yes, there’s a difference.

To check, just look at the markings on the adapter and find how many watts it can support. You should use one that can support at least 10 watts for it to charge your iPad at an efficient rate. Anything lower than that would result in a slow charging process for your iPad.

Going back to charging your iPad using a computer, what if you’re using a new computer anyway? If that’s the case, consider restarting your iPad. There might be some software problems on your iPad. Rebooting it would refresh all the apps on your iPad and would hopefully do the trick.

Use a flashlight to check your iPad’s charging port. Once you see any dirt in there, try to clean it by using a brush or a toothpick. There are several ways that you can do to properly clean your charging port without damaging it. Avoid being rough or forceful when cleaning your charging port as some parts of it are actually sensitive. If you’re not sure how to do it, you can bring your iPad to an Apple Store to have it cleaned. It’s usually free anyway.

Once you’ve done everything you can to charge your iPad and nothing works, the best thing to do would be to bring it to an Apple Store and have it checked by a professional. There’s a possibility that the problem lies in the hardware. Set up an appointment in the Apple Store nearest you and have them assess the current state of your iPad.