You are here: Home / iPad / 7 Awesome Book Apps (For Grownups) 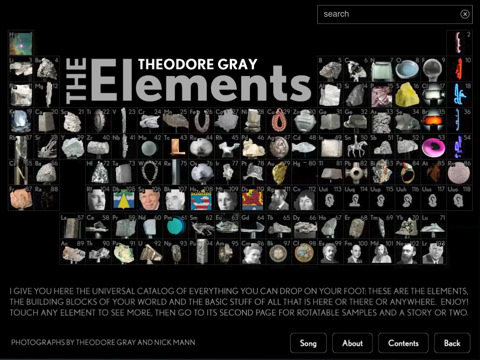 Al Gore’s been getting a lot of headlines lately for his new book app about environmental issues, Our Choice. It’s an interactive app that’s also a readable book, and it has all sorts of built-in activities and enhancements to its print counterpart. And it’s being called a must-have, if only for its innovation.

But it’s not the only revolutionary book app available for iOS that really takes advantage of the handsome screen size of the iPad. Granted, there aren’t a ton of them. But here are seven incredible titles that book readers — and app lovers — will die for. The Elements: A Visual Exploration

Price: $13.99
The Elements was one of the very first apps made exclusively for the iPad, and Apple loved it so much they included it in one of their first TV commercials for the iPad. It’s a little pricey, but for good reason: it’s simply stunning to behold. Explore the periodic table of elements like never before by touching fragments of each one, with fully-animated screens and interactive data. Price: $13.99
The latest book app from Touch Press, the developers behind The Elements, is Gems and Jewels, which presents more than 300 precious stones as rotatable, pinch-to-zoom objects that you can interact with. Absolutely gorgeous. Price: $.99
An extremely abridged version (hey, it’s $.99, what do you want?) of the famed book of world records that has tons of photos, videos, charts, and even some minigame challenges. Price: $4.99
Celebrating 50 years of humans in space, Man in Space is a fascinating, highly visual chronicle of mankind’s ventures out from planet Earth. Includes lots of video, rotatable 3D spacecraft, and interactive charts. A must-own for space nuts. Price: Free w/ in-app purchases
Not quite as interactive as other entries on this list, but a must-have nonetheless. It’s a fantastic collection of MoMA-published volumes that aren’t available anywhere else, and more books are being added all the time. Price: $4.99
Al Gore’s ultimate treatise on the climate crisis is as fascinating as it is fun. As crafted by Push Pop Press,Â Our Choice sets a new standard for interactive publishing. Price: $13.99
From the makers of The Elements, Solar System takes a similarly visual approach to teaching you everything you ever wanted to know about the planets, moons, and asteroids of our home solar system. It even features live data from Wolfram Alpha.