You are here: Home / Feature / Our 10 Most Wanted iOS 7 Features 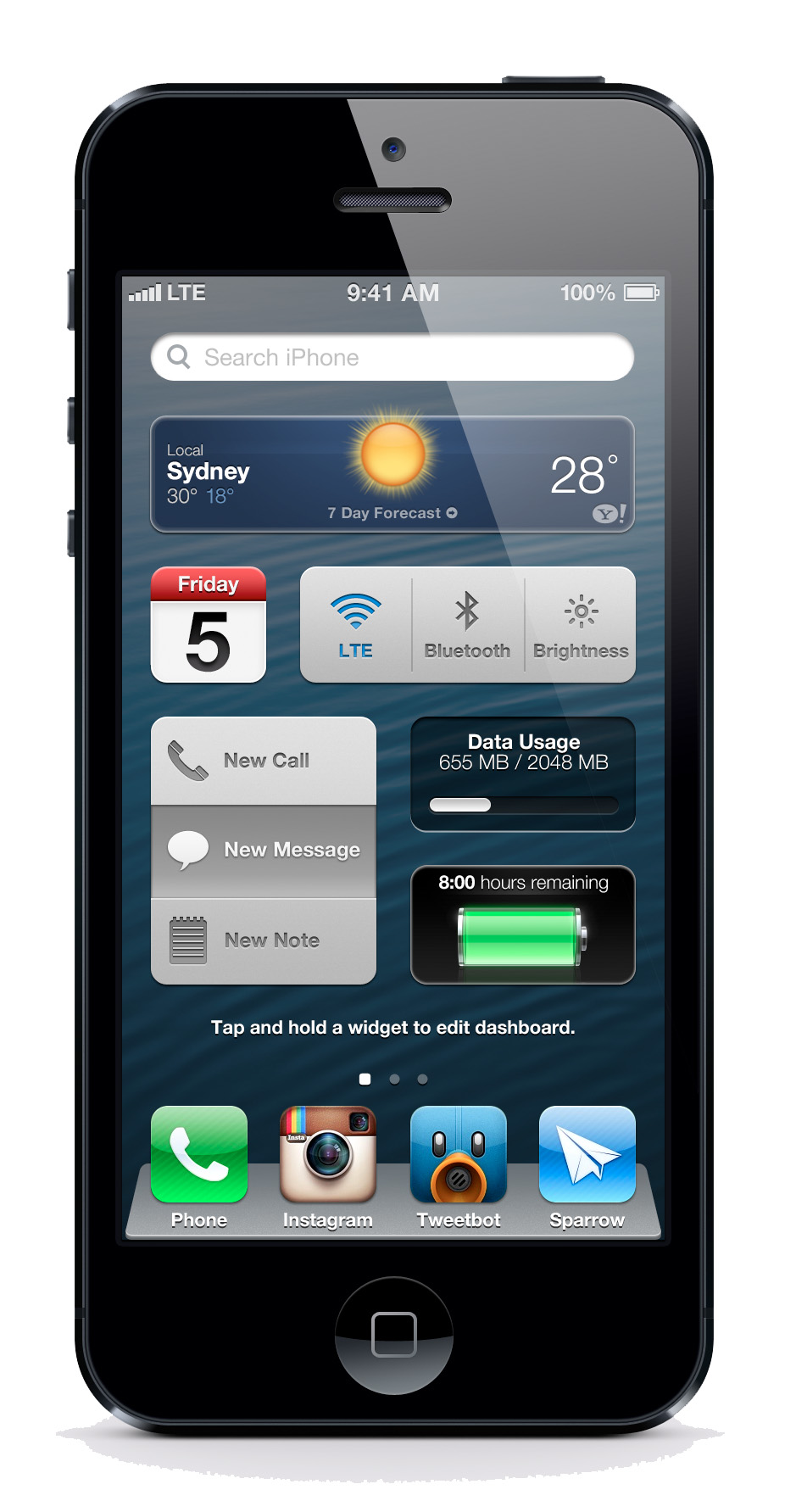 This Summer or Fall, Apple is dropping a new version of iOS on us, and this one won’t be business as usual. This time, Jony Ive’s minimalist design sensibilities are at the helm, and that changes everything. Here are 10 innovative features we’re desperately hoping will show up in iOS 7.

Anybody can add gimmicky photography features. That’s not innovation. Throwing any and every new technology at mobile devices and seeing which ones stick ain’t how Apple rolls. They’re more thoughtful, both of the individual’s experience and the whole package — software and hardware working as one. That will never be more true than with the advent of iOS 7, because Apple’s design guru Sir Jonathan Ive is overseeing both. For the first time, an Apple device will have a completely unified vision, and that is something worth getting excited about.

These are the top 10 innovations we’re hoping Apple brings to iOS 7. 1. Reinvent the Home Screen
More than any other feature, most users (myself included) agree that the iOS home screen is in desperate need of an intervention. A lifeless grid of icons is so five years ago. It was serviceable in its day, but this is 2013 and we expect more. As much as I call Microsoft out for always cribbing off of Apple’s playbook, one thing I’ll give them props for is the “live tiles” design concept used on the Windows Phone and Surface home screen. It’s dynamic, it’s interactive, and it’s everything that a modern mobile device home screen should be. I adore great apps as much as the next guy, but… screw those darn icons! We need something more exciting, something that gives us at-a-glance current info and direct access to the data we need instead of the apps we get data from. Even Android has front page widgets for easy access to crucial info. It’s time for Apple to step up to the plate and show everybody what the dynamic, customizable home screen of the future looks like. [Concept art by theIntensePlayer]

2. No More Tacky Textures
Thank God the tacky leather, paper, and string stitching of Apple’s Game Center, Calendar, and more — aka a design language called skeuomorphism — are about to become extinct on Apple devices. They are the philosophy of a past regime, but those days are over and Apple is ready to step into the now. Like the wonders of design that Apple loves to tout, this issue is about a lot more than how an app looks. It’s about functionality as well. The loss of skeuomorphism will lead to not just more attractive apps, but apps that work better. Take email, for example. Third-party apps like Mailbox for iPhone and the drop-dead gorgeous Incredimail for iPad are showing us what email clients can and should be on touchscreen devices. Awesome Calendar and Tempo are far better calendars than Apple’s Calendar. The interfaces for iOS Mail and Calendar currently look and function identical to their desktop cousins. Has Apple forgotten that touchscreen devices and Macs are two different machines with different interfaces?

3. Multiple User Accounts on a Single Device
Maybe there are apps on your iPhone that your kids have no business using. Maybe you don’t want anyone else reading your email. What if the iPad that your family shares had customized settings (app layout, wallpapers, notification sounds, etc.) for each person that uses it? This is great not just for parents whose kids borrow their iPhone or iPad, but anyone who wants to share a device. Android’s been offering this feature since Jelly Bean arrived. Windows Phone gives parents with a “Kid’s Corner” area where the little ones can hop on mom or dad’s device and play their favorite kid-friendly apps. Frankly, this one’s long overdue. Apple should have built it into the very first iPhone.

4. Open Up (Some!) Standards
Apple is known for keeping a stranglehold on pretty much everything it creates, patenting their every screw and rounded rectangle. I think it’s time to relax that policy — just a little. (It wouldn’t be Apple if they went open-source-everything.) Steve Jobs once promised iPhone developers that FaceTime standards would be made available so that other apps and even non-Apple devices could make FaceTime calls. A few years later, we’re still waiting on that promise to be fulfilled. Or what about Siri? What does Apple gain by saving her for Apple-made apps only? Give developers access to a Siri API so she can interact with third-party apps. And then there’s the whole “saved files” issue. On iOS devices, most apps can only access files that they’ve saved. Photos have the Photo Library so image files can be shared, but there’s no similar “pool” for other kinds of data files like documents. Sharing files from one device to another is hard enough. Sharing files between apps on the same device needn’t be such a headache. And as long as Apple’s loosening its grip…

5. Give Us More Customization Options
Apple is known for simplifying the user experience with elegant interfaces that take care of all the complicated stuff so you don’t have to. But sometimes this philosophy causes them to err too far in the opposite direction. Case in point: the Stocks app on the iPhone. I own no stocks, and don’t plan on buying any. I have never once opened the Stocks app, but my iPhone won’t let me delete the blasted thing. That’s so dumb! But Apple, please don’t stop there. Today’s users want to personalize their devices to suit their own needs — and that goes beyond changing wallpapers and notification sounds. A really ingenious idea I saw over at Ars Technica would let users customize their devices on an app-by-app basis. So for example, you could set your display to low-light conditions for most apps, but have it automatically switch to a higher brightness level when you’re looking at photos. The possibilities are endless for this kind of conditional personalization, and it makes loads of sense.

6. Automatic App Updates
Developers update their apps constantly. If you have a lot of apps, you know what a chore it can be to go through the daily hassle of manually updating them. So why are updating them manually, again? Just simplify it and let developers update their apps automatically, running in the background, or at times when you’re not actively using your device. Users who want to know about what’s been updated can get a notification about it. Or turn off the options in specific apps if you don’t want them to auto-update.

7. Better Multitasking
iOS devices have never been great at multitasking. That’s a good thing for helping users focus on the task at hand, but not very convenient when you need to switch between apps. The four-fingered gesture that swipes sideways from one app to the next was a good start, but multitasking needs to go deeper. Fan-made demos have been appearing online for months showing how the multitasking bar can hold a lot more than just icons. Wouldn’t it be great to be able to see a live preview of whatever files are open in those apps, instead of just the boring ol’ icon? Take it a step further by enabling a drag-and-drop version of cut-and-paste to simplify sharing files (see #4) or clipboard data between apps.

8. Interactive Notifications
One of the few things Android does well is make notifications smarter and more user-friendly. Like iOS, you swipe down from the top of the screen to see your notification list. The difference is that Android lets you react to them right there. Apple’s devices require you to tap on an item on the list, which then takes you to an app where you can take some kind of appropriate action. The first time I saw Android’s smarter notifications, I thought it was one of those extraneous gimmicks that wasn’t necessary. But the more I think about it, the more value I see in eliminating that extra step between alert and action. It’s so obvious, it feels like a no-brainer.

9. Automated Tasks
Imagine being able to tie functions of disparate apps together and have them activated based on certain conditions. It’d be like IFTTT for everyday things you do with your phone. Apple has already dabbled in this for location-based tasks with Reminders and Passbook. But take it further and it opens up all sorts of possibilities. Just think… When you get in your car, your iPhone would launch Spotify or Pandora for you and couple to your car’s stereo speakers via Bluetooth. Go to work and your phone would launch your favorite to-do list app, or maybe your email. College students could go to class and their iPad would launch iBooks or iTunes U right on the page where they left off the last time they were there. But there’s so many different inputs your iOS device can read, like motion, weather, messaging, audio, dates and times, and so on. The possibilities are limitless and it’s not like this is something beyond technology’s reach. All this idea needs is for Apple to whittle it down to its essence and make it so simple your grandma can do it. Fortunately, that’s what they do best.

10. Fine Control Over Data Usage
This could be a gamechanger. Power users know what a hassle it can be to have to squeeze off the pipeline when getting close to their cellular data limit. Travelers know this better than anyone. A crafty way of solving this would be to have a handful of settings for data usage, which would alter how much data your apps are allowed to download in the background. Your “Full” or “Maximum” setting would be for places with WiFi, while incoming data would be slowed down on a “Low” setting at times when you have to rely solely on expensive cell data. They’re called “smartphones,” after all. They ought to be smart enough to keep you from going over your monthly limit.