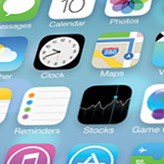 You know you want it. iOS 7 will be here this Fall, and we can’t wait to see how it’s going to change our iPhones and iPads. While we wait, here’s an extensive gallery of iOS 7 screenshots to tide you over.

Click on any image for a larger version. And remember, these are images of the iOS 7 beta. So everything here is subject to change.

Folder view is seen on the right. It now features horizontal scrolling, so you’re no longer limited to a handful of apps per folder. Also note how it displays only three columns of apps instead of four like the Home screen. This is another subtle touch to reinforce the “layered panes” design philosophy of iOS 7 — the three columns make Folders feel like they’re closer to you than the Home Screen.

The new Lost Phone mode is seen in the last two images.

Notifications now has three viewing modes: Today, All, and Missed.

Control Center is activated by swiping up from the bottom of any screen.

In addition to the new look, Siri is getting two new voices you can choose from — a female and a male.

Pretty girl with perfect hair, skin, and teeth not included.

On the right, you can see the new FaceTime Audio mode, which lets you make audio calls (just like the Phone app) using Apple’s FaceTime service. In other words, it’s FaceTime calls without the video.

The camera now has four basic modes: Photo, Square, Panorama, and Video. There are also Filters, which combined with the Square camera mode create a pretty obvious copy of Instagram.

Lots of new thumbnail views in the Photo Gallery, along with a whole new way of sorting and organizing photos, which is done automatically, separating pics into “moments.” Photo Streams can be shared and added to by an entire group now, too.

The first screenshot here includes a good look at the new keyboard.

One of the best-looking enhancements to Safari is the tab view, which you can see in the second shot. The third is new bookmarks view.

Turn-by-turn directions are seen in the second image.

I can’t decide if this is an improvement over the green felt craps table or not.

The Compass app comes with a nifty new auto-level feature. Apple hasn’t yet shown off this feature in any official screenshots, so I’m guessing they’re not satisfied with it yet.

As you can see in the Newsstand shot in the third image, the wooden bookshelves are going away, too.

The App Store is getting two nifty new functions. A new “Kids” category groups together all of the kid-friendly apps in the App Store, while an “Apps Near Me” list shows you what apps are the most popular in your current location. Should come in mighty handy for travelers.

Passbook will let you scan QR codes to add a card to your collection.

What you can’t tell from these screenshots is that they’re all animated. The rain looks like real rain, the snow flutters from the top of the screen exactly like real snow would. The sun in the first one even glints and creates lens flares.

Nothing flashy to see here, but I thought it was worth including because even Settings is getting a makeover. The second image shows controls for the new iCloud Keychain feature.