You are here: Home / iMac / YouTuber Reveals A Big Problem With The Mac Pro Wheels 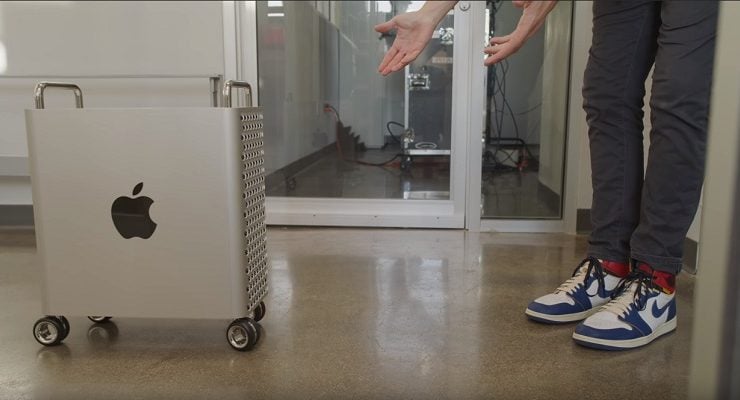 The Mac Pro is a beast of a machine and at the cost of roughly $6000 to $50,000, it’s expected to perform like a flagship device from Apple. Of course, anyone who can afford that retail price for such hardware can probably afford some accessories for it, like the Mac Pro wheels which cost an additional $400. The problem is, it’s not exactly a foolproof accessory, especially for the price.

The Mac Pro wheels, which were supposed to help the Mac Pro users move around the bulky desktop computer more easily, can actually turn the whole device into an accident waiting to happen. This was proven and demonstrated by a tech YouTuber named Marques Brownlee. In a video, Brownlee discovered that the Mac Pro wheels lacked a basic function most modern wheels have: a brake. In this case, it’s more like a locking mechanism but you get the point.

As you can see from the video, the Mac Pro wheels simply don’t know when to stop, quite literally. All Brownlee’s colleague had to do was give it a little nudge and the whole device will start snowballing until it hits something. If you do place your Mac on the floor then that shouldn’t be a problem. However, this design oversight limits the options for placing the device on desks; that is unless you want to risk damaging a computer worth thousands of dollars. Granted, you could place some makeshift stoppers for the wheels; still, that’s not a permanent or viable solution 100 percent of the time. At the moment, you’ll just have to keep tabs on your Mac Pro with wheels.

RELATED: 12 Super Cool Things to Do on a Mac Computer