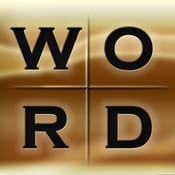 Combining grammar with strategy, word puzzle fanatics are in for an addictive treat with the terrific W.E.L.D.E.R., from Ayopa Games.

A bit of a steampunk vibe infuses W.E.L.D.E.R.‘s every pixel, with metal welding sounds and visual effects. It puts a number of twists on the usual word-building grid game. The first thing you’ll notice is that there’s no timer. Instead of the motivation of a ticking clock, the game presents you with limited resources that you must use wisely, or game over. With a minimum of four letters — unlike the usual three from most word games — you can build any word you can think of. The letters disappear, and new ones slide down from the top of the screen to take their place. Every level comes with a prescribed number of words that must be built, in order to advance. You’re also given a certain number of “swaps” (or moves) that you can perform, before you run out and lose the game. You start out with less swaps than the number of words you need to build, but you can earn more swaps by building bigger and better words.

As you might imagine, minimal movement is what you’re after, and the more words you can build with just one swap, the better. Sort of like Scrabble, lettered tiles have colored backgrounds that correspond with how many points they’ll score you; score enough points, and you get more swaps added to your bank. There are also blank wooden tiles that you can use to stand in for any letter — though you don’t get any points for doing so. But things get a lot more interesting when the game starts introducing variant tiles that have properties that change things dramatically. There are tiles that burn red hot, which you can’t swap, but which will move with gravity as tiles beneath them are eliminated. There are the rusted metal tiles, which are like immovable rocks: you can’t swap them, and they don’t move for anything. When these start piling up, it can create some major challenges, particularly when they’re at the top of the screen, because they’ll prevent the columns beneath them from receiving new tiles, creating huge gaps in the board. Then there are the gold and jewel-encrusted tiles, which give you greatly increased points. If you manage to combine any of these tiles in a single word, it multiplies your points dramatically.

There are also special swaps you can earn over time, including the group swap (which is exactly what it sounds like), the reverse swap (do a reversal of up to a entire row or column of tiles), and the jump swap (switches any two swappable tiles on the board, regardless of where they are). These are very limited resources, so again, it takes a strategic mind to know when to use them and when to save them for later. Game Center leaderboards let you see how you stack up against your friends, and there are a huge number of clever achievements that are more thought-out than the seemingly arbitrary achievements you might find in other games, making you feel like you’ve really accomplished something. There’s a nifty dictionary feature that lets you tap on any word you’ve spelled to see what it means, using iOS 5’s built-in dictionary. There’s Twitter and Facebook integration, so you can share your biggest victories with others. And there’s even iCloud capability that transfers your saved games from one iOS device to another.

W.E.L.D.E.R. is a highly polished word puzzle game that gets my highest recommendation. It’s a blast, and I can’t stop playing it!