You are here: Home / Games / Review: Time Geeks: Find All 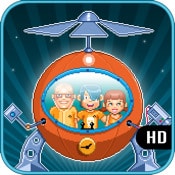 Time Geeks from Ivanovich Games is a fun Waldo-type game with a style and sensibility all its own. It boasts a keen eye toward pop culture, with cheeky references to everything from Dune to Lost.

The story behind the action is a nonsensical tale of aliens called “Zoorgs” who have been messing around with time, shifting people around to times and places that they don’t belong. The heroic Time Geeks — a trio of four-eyed nerds in a big, ball-shaped time machine — have to track down everyone who’s been displaced so that order can be restored to the universe. (Yeah, it’s best not to think about that too hard.) The game presents you with a series of missions in eleven locales, which are presented from a top-down/diagonal perspective, similar to the earliest Sim City games, and a list of people, animals, objects, and even aliens for you to find. Stuff is jam-packed into every part of these places, and you’re charged with finding the ones on your list. Early levels start off relatively easy (the first level is Lost‘s island, complete with Oceanic Airline’s downed airplane, the sonic fence, smoke monster, hatch, Dharma van, and more), but they get harder fast.

The game’s graphics are presented in the cutesy, Pixel Art style that everyone finds so “charming” these days. You can pinch-to-zoom in and get a closer look, though this function was twitchy at best for me. I spent most of my time leaving the screen zoomed out as a result. When each level begins, you’re presented with a list of ten to fifteen people or objects to find, but they’re only revealed one at a time so that your focus is on finding a single item. One of my biggest gripes against the game is that in every level, the Time Geeks appear at the center of the screen in their time machine, no matter where you look. Scroll around the screen, and they fly right over, following you around. You can’t get rid of them, and they always block a bit of the screen as they hover there. It’s endlessly annoying. This had to have been built into the game on purpose, but I can’t imagine why. There are seven game modes to play through, though you’ll spend most of your time on the “History” mode. The others are variations where you find one kind of object or person in every level. There are also some minigames included, and even a level editor so that you can create your own Pixel Art.

With nearly endless challenges to play through, Time Geeks is a solid value for the money. (Note that while the initial game download itself is free, an in-app purchase is required to unlock the full game.) But it’s not without its faults.